Is Independence Realty Trust Inc (NYSEMKT:IRT) a buy, sell, or hold? The best stock pickers are betting on the stock. The number of bullish hedge fund positions went up by 6 lately. Our calculations also showed that IRT isn’t among the 30 most popular stocks among hedge funds.

What have hedge funds been doing with Independence Realty Trust Inc (NYSEMKT:IRT)? 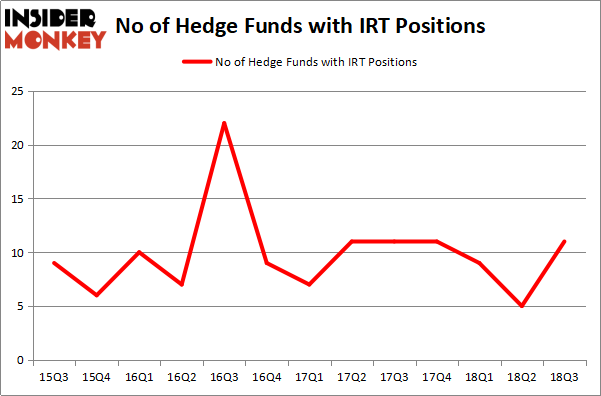 When looking at the institutional investors followed by Insider Monkey, Jim Simons’s Renaissance Technologies has the number one position in Independence Realty Trust Inc (NYSEMKT:IRT), worth close to $28.8 million, accounting for less than 0.1%% of its total 13F portfolio. Coming in second is Ancora Advisors, managed by Frederick DiSanto, which holds a $12 million position; the fund has 0.5% of its 13F portfolio invested in the stock. Some other members of the smart money that are bullish consist of Ken Griffin’s Citadel Investment Group, James Dondero’s Highland Capital Management and Michael Platt and William Reeves’s BlueCrest Capital Mgmt..

Let’s now take a look at hedge fund activity in other stocks – not necessarily in the same industry as Independence Realty Trust Inc (NYSEMKT:IRT) but similarly valued. We will take a look at CBTX, Inc. (NASDAQ:CBTX), Columbus McKinnon Corporation (NASDAQ:CMCO), Revance Therapeutics Inc (NASDAQ:RVNC), and Codexis, Inc. (NASDAQ:CDXS). All of these stocks’ market caps are closest to IRT’s market cap.

As you can see these stocks had an average of 12.75 hedge funds with bullish positions and the average amount invested in these stocks was $95 million. That figure was $55 million in IRT’s case. Columbus McKinnon Corporation (NASDAQ:CMCO) is the most popular stock in this table. On the other hand CBTX, Inc. (NASDAQ:CBTX) is the least popular one with only 8 bullish hedge fund positions. Independence Realty Trust Inc (NYSEMKT:IRT) is not the least popular stock in this group but hedge fund interest is still below average. This is a slightly negative signal and we’d rather spend our time researching stocks that hedge funds are piling on. In this regard CMCO might be a better candidate to consider a long position.