How To Know When You Can Retire With Dividend Investing

When I consider the topic of retirement the first thing that comes to mind is John Maynard Keynes 1930 essay titled “Economic Possibilities For Our Grandchildren.”

Back in 1930 people were not thinking about long walks on the beach in your 80’s or a few decades of leisurely golf and jazzercise.

Retirement is a new concept – at least if you grant that the last half century or so still counts as “new.”

Here, I’ll show you what I mean: 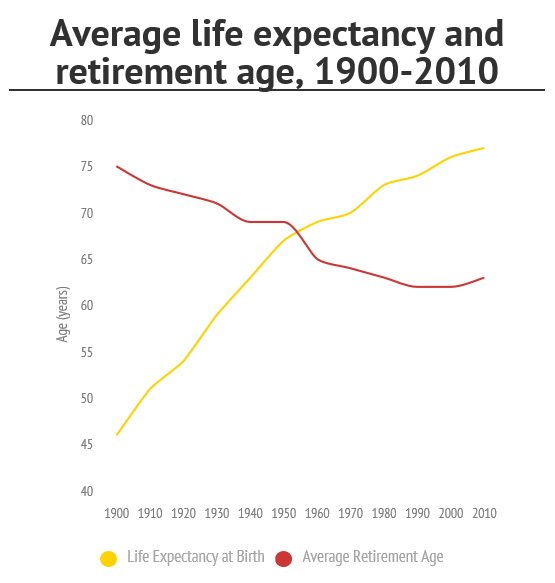 I can’t vouch for the early 1900’s, but the more recent period details the current situation well in my view.

People are living longer than ever before. The average life expectancy is now up to 80 and beyond. The assumed “normal” retirement age is around 65, the actual number is closer to 62.

You ought to be thinking about 20 years of retirement – or even more if you achieve early retirement.

What strikes me about the John Maynard Keynes essay is that he foresaw this coming. Keynes knew that small economic improvements would lead to substantial results over the long-term.

He indicated that a larger issue in the future would not be solving the “economic problem” but instead trying to figure out what to do with an abundance of time. So here we are today.

Keynes also indicated that the average work week, one hundred years hence, could only be 15 hours. And even then, this would only be to give workers small tasks and routines to stay active.

As a result of this statement, the late Keynes now takes a good deal of indefensible flak. Today’s blog writer will dig up a stat that suggests the average work week is 35 or 40 hours and point out how far off Keynes judgment has been, scoffing at the notion.

Yet here’s where things get really interesting in my view. Keynes did not call the essay “Economic Guarantees For Our Grandchild.” Instead, he simply indicated that they were “possibilities.”

This concept is perhaps more important than you first realize.

Keynes pointed out that humans had “needs” which fell into two classes.

The first is what he called “absolute” which I would describe as “basic” or “fundamental.” Think shelter and food, the things that you must have to continue living. These needs can surely be satisfied.

The second class of “need” that Keynes described is the desire to be better than others. To feel more accomplished, have more possessions or otherwise feel superior. Contrary to basic needs, this desire may never be satisfied. As the general population gains more, so too will this “need.”

In today’s parlance, I’d call it the “keeping up with the Joneses” desire. Only more than keeping it up, it’s an aspiration to keep up and then zoom past them in your new Ferrari. 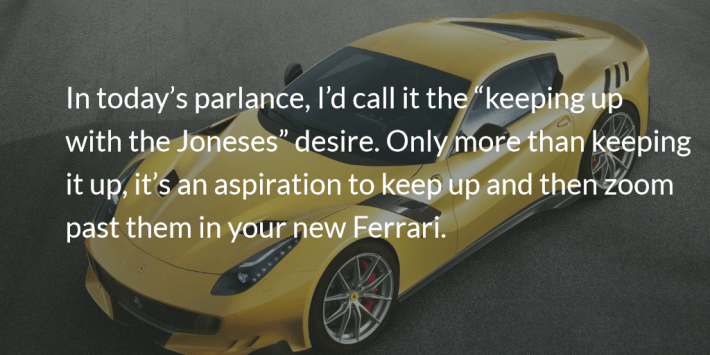 It reminds me of a classic Benjamin Franklin quote:

“It is the eye of other people that ruin us. If I were blind, I would want neither fine clothes, fine houses or fine furniture.”

Which, incidentally, brings us to the most important part of figuring out retirement…

Harley-Davidson (HOG), Infoblox (BLOX), and More: Why Are These Stocks Plunging...

Why These 5 Stocks Have Spiked Today: What You Need to Know