Published on June 9, 2016 at 6:37 am by Sure Dividend in Dividend Stocks, News, Stock Analysis

The United States military spends more than the next 11 largest militaries of the world combined.

What if you could turn the flow of your tax dollars around?

What if you could divert a portion of this $500+ billion annual cash stream into your own growing dividend income?

This article shows how to do just that by investing in shareholder friendly defense contractor General Dynamics Corporation (NYSE:GD).

General Dynamics ranks as a buy and current Top 10 stock using The 8 Rules of Dividend Investing thanks to its:

General Dynamics isn’t the largest defense contractor (it’s 4th largest in the world based on market cap), but it does have an enviable dividend history,

General Dynamics’ dividend payments were being collected by 43 of the hedge funds and other investment firms tracked by Insider Monkey as of March 31. Those investors owned $5.93 billion worth of the company’s shares, accounting for 14.50% of its float, making top investors overweight the stock. James A. Star’s Longview Asset Management was a particularly bullish shareholder of General Dynamics, owning just under 33.33 million GD shares at the end of March.

General Dynamics has been paying uninterrupted dividends since 1979.

In March, the board of directors increased the company’s quarterly dividend by 10.1% to $0.76 per share, representing the company’s 25th consecutive annual dividend increase. General Dynamics may well soon become the newest Dividend Aristocrat.

Also, the company repurchased 7.8 million of its outstanding shares in the first quarter. The forward annual dividend yield is at 2.2%, and the payout ratio is only 30%. The annual rate of dividend growth over the past three years was high at 10.6%, over the past five years was also high at 10.4%, and over the last ten years was very high at 13.2%.

Since General Dynamics is generating much free cash flow, and the payout ratio is low, there is a very good chance that the company will continue to raise its dividend payment. 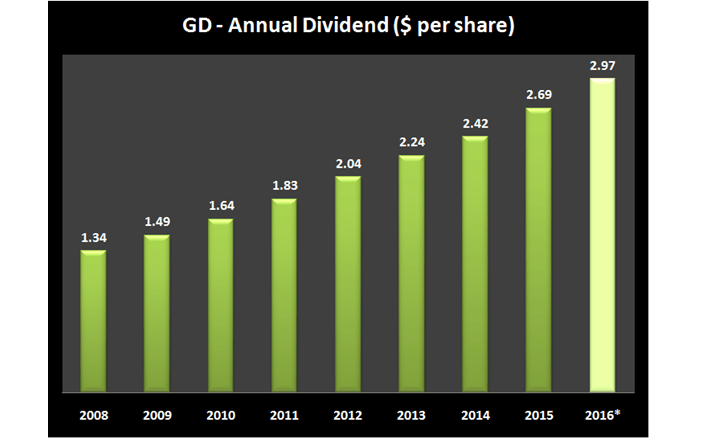 General Dynamics Is Off To A Good Start in 2016

In December 2015, Congress passed an FY16 defense budget of $573 billion, $38 billion higher than the base recommendation.  That helped lay the foundation for General Dynamics success in 2016.

The company has had a very good start to the year; better than its expectations. General Dynamics delivered strong first quarter results, and according to the company, it is ahead of the operating plan on which its guidance was based.

General Dynamics has been able to achieve growth in the last few years despite budget-cutting headwinds. In 2015, the company derived 55% of its revenues from the U.S. government, compared to 58% in 2014.

However, recent budget trends have been supportive for the industry.

Department of Defense forecasts calls for additional increases of 2% through 2020. The 2016 budget includes modernizing investments in such areas as nuclear deterrence, missile defense, cyber security and power projection. As such, that development will benefit the company.