Novo Nordisk A/S (ADR) (NYSE:NVO) recently got some bad news from the Food and Drug Administration: a request for additional information about a key insulin product. That notice could delay the new treatment’s launch until at least 2015 — a big delay, but one the company can probably handle.

Novo Nordisk started treating people with insulin in 1923. Today, insulin is the company’s core market, with a 49% share of the world market based on volume. While the company has other areas on which it focuses, including hemophilia and weight loss (intimately tied to diabetes and insulin), it derives nearly 80% of its revenues from its diabetes business. Insulin, then, is ultra-important to Novo’s long-term success.

This market holds great opportunity, too. For example, the company believes that there are over 370 million people with diabetes in the world today. It expects that number to increase to 550 million by 2030. The United States is one of the leading markets, largely because of an aging and increasingly overweight population, factors that increase the incidence of type 2 diabetes. China, however, is an up-and-coming market for the Novo as well.

Novo Nordisk A/S (ADR) (NYSE:NVO) estimates that there are over 90 million people in China with diabetes, making it the world’s largest diabetes market. Interestingly, the same reasons that have made the United States such an important market are increasingly hurting Chinese citizens. “With economic growth comes urbanisation, with urbanisation come sedentary lifestyles – and then diabetes follows.” Management estimates that 90% of people with diabetes have type 2.

The big pushes in diabetes research are to reduce the number of times that a diabetic has to medicate, and to improve the medication delivery method. Injection is the main method for getting insulin into the body. Clearly, that’s not a desirable approach, so reducing the number of times that a patient has to inject themselves, or completely altering the way in which insulin is delivered, would be a huge benefit and likely lead to a blockbuster drug.

This is where the company’s once-a-day Tresiba comes into play. The drug has been approved in Japan, Mexico, and in the European Union. However, in early 2013, the FDA chose not to approve the drug, asking instead for additional research into Tresiba’s potential cardiovascular risks.

After receiving approval in the other markets, the FDA’s decision came as something of a shock to the market. At one point following the news, Novo Nordisk’s shares were down as much as 17%. While the shares rebounded from those depths, the announcement sent the shares notably lower. 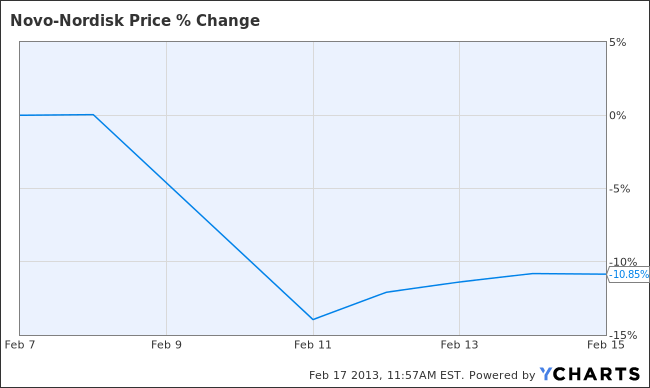 Providing the research to the FDA will be expensive and time-consuming. In fact, Reuters reported that Novo’s Chief Scientific Officer, Mads Thomsen, said that the company probably wouldn’t be able to provide the information until after 2014. Some market watchers estimate that even 2015 could be an aggressive expectation. A multi-year delay is clearly not a good thing for the company’s prospects, since the U.S. market is so important to its business.

This Hedge Fund Manager is Going Against the Grain, Should You? – Cisco...
Monthly Newsletter Strategy
Download a free copy of our newsletter and see the details inside!
Hedge Fund Resource Center
Billionaire Hedge Funds