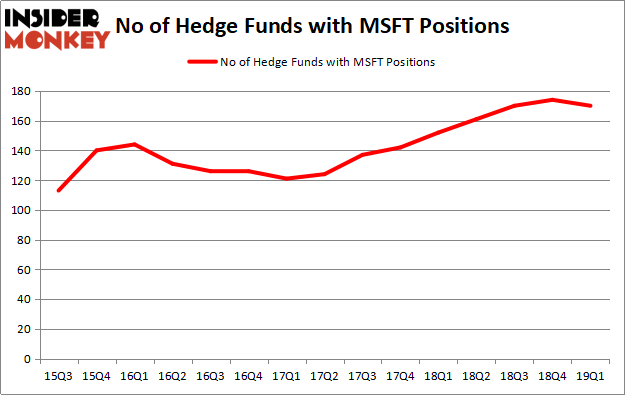 Among these funds, Eagle Capital Management held the most valuable stake in Microsoft Corporation (NASDAQ:MSFT), which was worth $2224.8 million at the end of the first quarter. On the second spot was AQR Capital Management which amassed $2105.9 million worth of shares. Moreover, Fisher Asset Management, Tiger Global Management, and Egerton Capital Limited were also bullish on Microsoft Corporation (NASDAQ:MSFT), allocating a large percentage of their portfolios to this stock.

Since Microsoft Corporation (NASDAQ:MSFT) has experienced bearish sentiment from hedge fund managers, we can see that there lies a certain “tier” of hedge funds that decided to sell off their entire stakes last quarter. At the top of the heap, Ricky Sandler’s Eminence Capital said goodbye to the largest stake of the “upper crust” of funds watched by Insider Monkey, totaling about $168.6 million in stock. Billionaire Richard Chilton’s fund, Chilton Investment Company, also sold off its stock, about $134.9 million worth. These moves are interesting, as aggregate hedge fund interest fell by 4 funds last quarter.

As you can see these stocks had an average of 136 hedge funds with bullish positions and the average amount invested in these stocks was $24804 million. That figure was $24799 million in MSFT’s case. Amazon.com, Inc. (NASDAQ:AMZN) is the most popular stock in this table. On the other hand Apple Inc. (NASDAQ:AAPL) is the least popular one with only 98 bullish hedge fund positions. Compared to these stocks Microsoft Corporation (NASDAQ:MSFT) is more popular among hedge funds. Our calculations showed that top 20 most popular stocks among hedge funds returned 6.4% in Q2 through June 28th and outperformed the S&P 500 ETF (SPY) by more than 2 percentage points. Hedge funds were also right about betting on MSFT as the stock returned 14% during Q2 and outperformed the market by an even larger margin. Microsoft shares also gained 32.9% during the first half of 2019 and significantly outperformed the market. Hedge funds were clearly right about piling into this stock relative to other stocks with similar market capitalizations.