How Mastercard and Other Hedge Fund Favorites Performed in Q2

What have hedge funds been doing with Mastercard Incorporated (NYSE:MA)?

At the end of the first quarter, a total of 94 of the hedge funds tracked by Insider Monkey were long this stock, a change of -2% from the fourth quarter of 2018. By comparison, 84 hedge funds held shares or bullish call options in MA a year ago. With hedgies’ sentiment swirling, there exists a few notable hedge fund managers who were upping their holdings significantly (or already accumulated large positions). 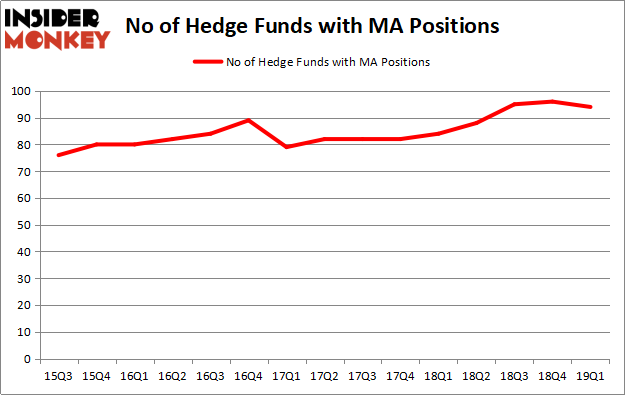 More specifically, Gardner Russo & Gardner was the largest shareholder of Mastercard Incorporated (NYSE:MA), with a stake worth $1751 million reported as of the end of March. Trailing Gardner Russo & Gardner was Akre Capital Management, which amassed a stake valued at $1254.5 million. Berkshire Hathaway, Arrowstreet Capital, and Lone Pine Capital were also very fond of the stock, giving the stock large weights in their portfolios.

Because Mastercard Incorporated (NYSE:MA) has faced a decline in interest from the entirety of the hedge funds we track, we can see that there were a few fund managers who sold off their entire stakes by the end of the third quarter. At the top of the heap, Richard Chilton’s Chilton Investment Company sold off the largest investment of the “upper crust” of funds monitored by Insider Monkey, valued at close to $107.1 million in stock. James Crichton’s fund, Hitchwood Capital Management, also cut its stock, about $33 million worth. These moves are intriguing to say the least, as aggregate hedge fund interest was cut by 2 funds by the end of the third quarter.

Let’s check out hedge fund activity in other stocks – not necessarily in the same industry as Mastercard Incorporated (NYSE:MA) but similarly valued. We will take a look at Intel Corporation (NASDAQ:INTC), Cisco Systems, Inc. (NASDAQ:CSCO), UnitedHealth Group Inc. (NYSE:UNH), and Pfizer Inc. (NYSE:PFE). All of these stocks’ market caps are similar to MA’s market cap.

As you can see these stocks had an average of 58 hedge funds with bullish positions and the average amount invested in these stocks was $4744 million. That figure was $11561 million in MA’s case. UnitedHealth Group Inc. (NYSE:UNH) is the most popular stock in this table. On the other hand Cisco Systems, Inc. (NASDAQ:CSCO) is the least popular one with only 45 bullish hedge fund positions. Compared to these stocks Mastercard Incorporated (NYSE:MA) is more popular among hedge funds. Our calculations showed that top 20 most popular stocks among hedge funds returned 6.4% in Q2 and outperformed the S&P 500 ETF (SPY) by more than 2 percentage points. Hedge funds were also right about betting on MA as the stock returned 12.5% during the same period and outperformed the market by an even larger margin. Mastercard shares also gained more than 40% year-to-date. Hedge funds were clearly right about piling into this stock relative to other stocks with similar market capitalizations.