During the first half of the fourth quarter the Russell 2000 ETF (IWM) lagged the larger S&P 500 ETF (SPY) by about 4 percentage points as investors worried over the possible ramifications of rising interest rates. The hedge funds and institutional investors we track typically invest more in smaller-cap stocks than an average investor (i.e. only 298 S&P 500 constituents were among the 500 most popular stocks among hedge funds), and we have seen data that shows those funds paring back their overall exposure. Those funds cutting positions in small-caps is one reason why volatility has increased. In the following paragraphs, we take a closer look at what hedge funds and prominent investors think of Knight-Swift Transportation Holdings Inc. (NYSE:KNX) and see how the stock is affected by the recent hedge fund activity.

Knight-Swift Transportation Holdings Inc. (NYSE:KNX) investors should pay attention to a decrease in support from the world’s most elite money managers in recent months. KNX was in 31 hedge funds’ portfolios at the end of the third quarter of 2018. There were 37 hedge funds in our database with KNX holdings at the end of the previous quarter, still not enough to be counted as among the 30 most popular stocks among hedge funds.

Knight Transportation and fellow Swift Transportation merged in an all-stock deal that gives the combined company an enterprise value of $6 billion in 2017. The move was a blockbuster M&A deal in the trucking industry, creating the largest trucking company in the United States.

How have hedgies been trading Knight-Swift Transportation Holdings Inc. (NYSE:KNX)? 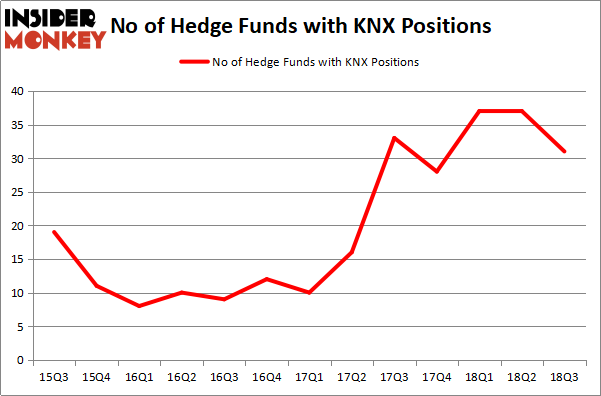 More specifically, Citadel Investment Group was the largest shareholder of Knight-Swift Transportation Holdings Inc. (NYSE:KNX), with a stake worth $138.9 million reported as of the end of September. Trailing Citadel Investment Group was Impala Asset Management, which amassed a stake valued at $46.5 million. Anchor Bolt Capital, 12th Street Asset Management, and Masters Capital Management were also very fond of the stock, giving the stock large weights in their portfolios.

Since Knight-Swift Transportation Holdings Inc. (NYSE:KNX) has witnessed bearish sentiment from hedge fund managers, it’s safe to say that there lies a certain “tier” of money managers that elected to cut their entire stakes last quarter. It’s worth mentioning that Alexander Mitchell’s Scopus Asset Management cut the biggest investment of all the hedgies watched by Insider Monkey, valued at an estimated $81.7 million in stock, and Gregg Moskowitz’s Interval Partners was right behind this move, as the fund dropped about $81.1 million worth. These moves are important to note, as total hedge fund interest fell by 6 funds last quarter.

As you can see these stocks had an average of 17.5 hedge funds with bullish positions and the average amount invested in these stocks was $470 million. That figure was $412 million in KNX’s case. Pure Storage, Inc. (NYSE:PSTG) is the most popular stock in this table. On the other hand Grupo Aeroportuario del Pacífico, S.A.B. de C.V. (NYSE:PAC) is the least popular one with only 5 bullish hedge fund positions. Knight-Swift Transportation Holdings Inc. (NYSE:KNX) is not the most popular stock in this group but hedge fund interest is still above average. This is a slightly positive signal but we’d rather spend our time researching stocks that hedge funds are piling on. In this regard PSTG might be a better candidate to consider a long position.