How Did Paypal Holdings Inc (PYPL) Compare Against Top Hedge Fund Stocks in 2019?

Last year’s fourth quarter was a rough one for investors and many hedge funds, which were naturally unable to overcome the big dip in the broad market, as the S&P 500 fell by about 4.8% during 2018 and average hedge fund losing about 1%. The Russell 2000, composed of smaller companies, performed even worse, trailing the S&P by more than 6 percentage points, as investors fled less-known quantities for safe havens. Luckily hedge funds were shifting their holdings into large-cap stocks. The 20 most popular hedge fund stocks actually generated an average return of 41.1% in 2019 (through December 23) and outperformed the S&P 500 ETF by more than 10 percentage points. In this article we will study how hedge fund sentiment towards Paypal Holdings Inc (NASDAQ:PYPL) changed during the third quarter and how the stock performed in comparison to hedge fund consensus stocks.

Paypal Holdings Inc (NASDAQ:PYPL) shares haven’t seen a lot of action during the third quarter. Overall, hedge fund sentiment was unchanged. The stock was in 95 hedge funds’ portfolios at the end of September. The level and the change in hedge fund popularity aren’t the only variables you need to analyze to decipher hedge funds’ perspectives. A stock may witness a boost in popularity but it may still be less popular than similarly priced stocks. That’s why at the end of this article we will examine companies such as Honeywell International Inc. (NYSE:HON), Texas Instruments Incorporated (NASDAQ:TXN), and Philip Morris International Inc. (NYSE:PM) to gather more data points. Our calculations also showed that PYPL ranks 15th among the 30 most popular stocks among hedge funds (click for Q3 rankings and see the video at the end of this article for Q2 rankings).

We leave no stone unturned when looking for the next great investment idea. For example Discover is offering this insane cashback card, so we look into shorting the stock. One of the most bullish analysts in America just put his money where his mouth is. He says, “I’m investing more today than I did back in early 2009.” So we check out his pitch. We read hedge fund investor letters and listen to stock pitches at hedge fund conferences. We even check out this option genius’ weekly trade ideas. This December, we recommended Adams Energy as a one-way bet based on an under-the-radar fund manager’s investor letter and the stock already gained 20 percent. Now let’s take a gander at the new hedge fund action encompassing Paypal Holdings Inc (NASDAQ:PYPL).

What does smart money think about Paypal Holdings Inc (NASDAQ:PYPL)?

At Q3’s end, a total of 95 of the hedge funds tracked by Insider Monkey held long positions in this stock, a change of 0% from the previous quarter. By comparison, 97 hedge funds held shares or bullish call options in PYPL a year ago. With the smart money’s positions undergoing their usual ebb and flow, there exists an “upper tier” of noteworthy hedge fund managers who were upping their holdings significantly (or already accumulated large positions). 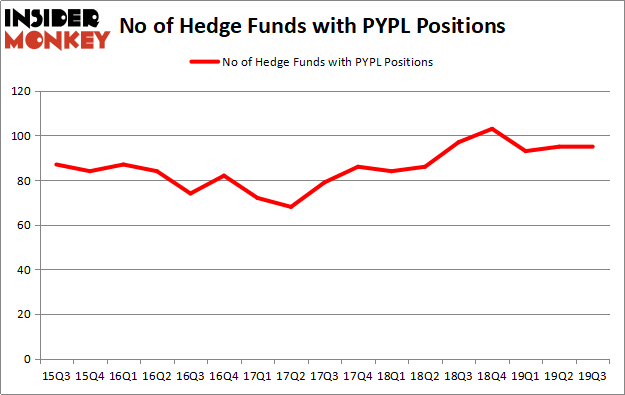 Of the funds tracked by Insider Monkey, Peter Rathjens, Bruce Clarke and John Campbell’s Arrowstreet Capital has the number one position in Paypal Holdings Inc (NASDAQ:PYPL), worth close to $467.7 million, comprising 1.1% of its total 13F portfolio. The second most bullish fund manager is Fisher Asset Management, led by Ken Fisher, holding a $456.1 million position; 0.5% of its 13F portfolio is allocated to the company. Other peers with similar optimism contain David E. Shaw’s D E Shaw, Philippe Laffont’s Coatue Management and Dan Loeb’s Third Point. In terms of the portfolio weights assigned to each position Ogborne Capital allocated the biggest weight to Paypal Holdings Inc (NASDAQ:PYPL), around 15.45% of its 13F portfolio. Marathon Partners is also relatively very bullish on the stock, designating 7.65 percent of its 13F equity portfolio to PYPL.

Since Paypal Holdings Inc (NASDAQ:PYPL) has faced declining sentiment from the smart money, logic holds that there was a specific group of fund managers that slashed their entire stakes by the end of the third quarter. Intriguingly, Alex Sacerdote’s Whale Rock Capital Management sold off the biggest investment of the “upper crust” of funds tracked by Insider Monkey, valued at close to $186.5 million in stock. Stanley Druckenmiller’s fund, Duquesne Capital, also cut its stock, about $55.1 million worth. These bearish behaviors are interesting, as total hedge fund interest stayed the same (this is a bearish signal in our experience).

As you can see these stocks had an average of 56.5 hedge funds with bullish positions and the average amount invested in these stocks was $3664 million. That figure was $4136 million in PYPL’s case. United Technologies Corporation (NYSE:UTX) is the most popular stock in this table. On the other hand Texas Instruments Incorporated (NASDAQ:TXN) is the least popular one with only 52 bullish hedge fund positions. Compared to these stocks Paypal Holdings Inc (NASDAQ:PYPL) is more popular among hedge funds. Our calculations showed that top 20 most popular stocks among hedge funds returned 41.1% in 2019 through December 23rd and outperformed the S&P 500 ETF (SPY) by 10.1 percentage points. Unfortunately PYPL wasn’t nearly as successful as these 20 stocks and hedge funds that were betting on PYPL were disappointed as the stock returned 29.2% so far in 2019 (thorugh 12/23) and underperformed the market. If you are interested in investing in large cap stocks with huge upside potential, you should check out the top 20 most popular stocks among hedge funds as 65 percent of these stocks already outperformed the market in 2019