Marriott Vacations Worldwide Corporation (NYSE:VAC) shares haven’t seen a lot of action during the third quarter. Overall, hedge fund sentiment was unchanged. The stock was in 27 hedge funds’ portfolios at the end of September. The level and the change in hedge fund popularity aren’t the only variables you need to analyze to decipher hedge funds’ perspectives. A stock may witness a boost in popularity but it may still be less popular than similarly priced stocks. That’s why at the end of this article we will examine companies such as CoreSite Realty Corp (NYSE:COR), Mercury Systems Inc (NASDAQ:MRCY), and Aurora Cannabis Inc. (NYSE:ACB) to gather more data points. Our calculations also showed that VAC isn’t among the 30 most popular stocks among hedge funds (click for Q3 rankings and see the video at the end of this article for Q2 rankings).

We leave no stone unturned when looking for the next great investment idea. For example Europe is set to become the world’s largest cannabis market, so we check out this European marijuana stock pitch. We read hedge fund investor letters and listen to stock pitches at hedge fund conferences. This December, we recommended Adams Energy as a one-way bet based on an under-the-radar fund manager’s investor letter and the stock is still extremely cheap despite already gaining 20 percent. With all of this in mind let’s take a look at the new hedge fund action encompassing Marriott Vacations Worldwide Corporation (NYSE:VAC).

At the end of the third quarter, a total of 27 of the hedge funds tracked by Insider Monkey were long this stock, a change of 0% from the previous quarter. On the other hand, there were a total of 32 hedge funds with a bullish position in VAC a year ago. With hedgies’ capital changing hands, there exists an “upper tier” of notable hedge fund managers who were boosting their stakes meaningfully (or already accumulated large positions). 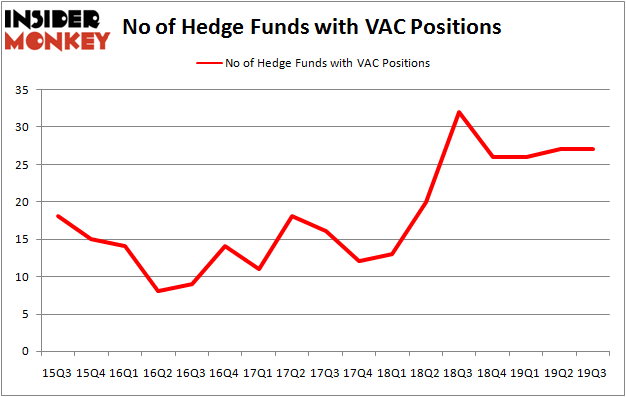 More specifically, Rima Senvest Management was the largest shareholder of Marriott Vacations Worldwide Corporation (NYSE:VAC), with a stake worth $179.6 million reported as of the end of September. Trailing Rima Senvest Management was Iridian Asset Management, which amassed a stake valued at $119.5 million. Nantahala Capital Management, Balyasny Asset Management, and Tremblant Capital were also very fond of the stock, becoming one of the largest hedge fund holders of the company. In terms of the portfolio weights assigned to each position FrontFour Capital Group allocated the biggest weight to Marriott Vacations Worldwide Corporation (NYSE:VAC), around 24.62% of its 13F portfolio. Rima Senvest Management is also relatively very bullish on the stock, earmarking 15.48 percent of its 13F equity portfolio to VAC.

Because Marriott Vacations Worldwide Corporation (NYSE:VAC) has faced bearish sentiment from the entirety of the hedge funds we track, it’s safe to say that there lies a certain “tier” of funds that decided to sell off their full holdings in the third quarter. Interestingly, Michael Johnston’s Steelhead Partners dropped the biggest position of the “upper crust” of funds followed by Insider Monkey, comprising close to $9.7 million in stock. Noam Gottesman’s fund, GLG Partners, also dumped its stock, about $4.7 million worth. These moves are intriguing to say the least, as total hedge fund interest stayed the same (this is a bearish signal in our experience).

As you can see these stocks had an average of 17.25 hedge funds with bullish positions and the average amount invested in these stocks was $174 million. That figure was $489 million in VAC’s case. Luckin Coffee Inc. (NASDAQ:LK) is the most popular stock in this table. On the other hand Aurora Cannabis Inc. (NYSE:ACB) is the least popular one with only 10 bullish hedge fund positions. Compared to these stocks Marriott Vacations Worldwide Corporation (NYSE:VAC) is more popular among hedge funds. Our calculations showed that top 20 most popular stocks among hedge funds returned 41.3% in 2019 and outperformed the S&P 500 ETF (SPY) by 10.1 percentage points. Hedge funds were also right about betting on VAC as the stock returned 85.9% in 2019 and outperformed the market by an even larger margin. Hedge funds were clearly right about piling into this stock relative to other stocks with similar market capitalizations.