How Did HubSpot Inc (HUBS) Compare Against Top Hedge Fund Stocks in 2019?

It has been a fantastic year for equity investors as Donald Trump pressured Federal Reserve to reduce interest rates and finalized the first leg of a trade deal with China. If you were a passive index fund investor, you had seen gains of 31% in your equity portfolio in 2019. However, if you were an active investor putting your money into hedge funds’ favorite stocks, you had seen gains of more than 41%. In this article we are going to take a look at how hedge funds feel about a stock like HubSpot Inc (NYSE:HUBS) and compare its performance against hedge funds’ favorite stocks.

HubSpot Inc (NYSE:HUBS) was in 34 hedge funds’ portfolios at the end of the third quarter of 2019. HUBS investors should pay attention to an increase in hedge fund sentiment of late. There were 33 hedge funds in our database with HUBS holdings at the end of the previous quarter. Our calculations also showed that HUBS isn’t among the 30 most popular stocks among hedge funds (click for Q3 rankings and see the video at the end of this article for Q2 rankings).

In the financial world there are a multitude of formulas investors employ to analyze publicly traded companies. A pair of the most useful formulas are hedge fund and insider trading signals. Our experts have shown that, historically, those who follow the top picks of the top hedge fund managers can outperform the broader indices by a healthy amount (see the details here).

We leave no stone unturned when looking for the next great investment idea. For example Discover is offering this insane cashback card, so we look into shorting the stock. One of the most bullish analysts in America just put his money where his mouth is. He says, “I’m investing more today than I did back in early 2009.” So we check out his pitch. We read hedge fund investor letters and listen to stock pitches at hedge fund conferences. We even check out this option genius’ weekly trade ideas. This December, we recommended Adams Energy as a one-way bet based on an under-the-radar fund manager’s investor letter and the stock already gained 20 percent. With all of this in mind we’re going to review the recent hedge fund action surrounding HubSpot Inc (NYSE:HUBS). 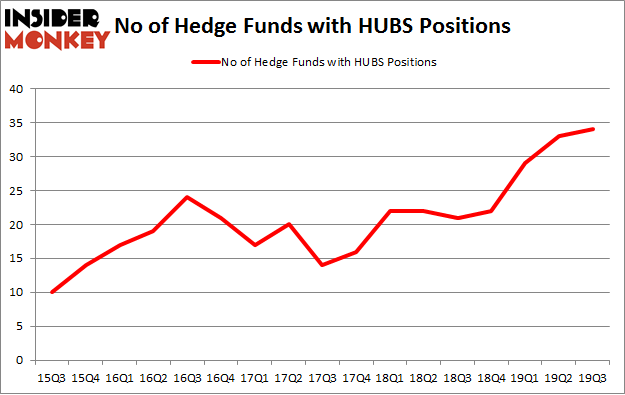 Among these funds, Citadel Investment Group held the most valuable stake in HubSpot Inc (NYSE:HUBS), which was worth $165.6 million at the end of the third quarter. On the second spot was SCGE Management which amassed $144.5 million worth of shares. Alkeon Capital Management, Two Sigma Advisors, and Renaissance Technologies were also very fond of the stock, becoming one of the largest hedge fund holders of the company. In terms of the portfolio weights assigned to each position North Peak Capital allocated the biggest weight to HubSpot Inc (NYSE:HUBS), around 10.59% of its 13F portfolio. SCGE Management is also relatively very bullish on the stock, designating 7.3 percent of its 13F equity portfolio to HUBS.

With a general bullishness amongst the heavyweights, some big names have jumped into HubSpot Inc (NYSE:HUBS) headfirst. North Peak Capital, managed by Michael Kahan and Jeremy Kahan, created the most valuable position in HubSpot Inc (NYSE:HUBS). North Peak Capital had $24.7 million invested in the company at the end of the quarter. Anand Parekh’s Alyeska Investment Group also made a $16.1 million investment in the stock during the quarter. The other funds with new positions in the stock are David Harding’s Winton Capital Management, Charles Clough’s Clough Capital Partners, and Karim Abbadi and Edward McBride’s Centiva Capital.

As you can see these stocks had an average of 21.25 hedge funds with bullish positions and the average amount invested in these stocks was $600 million. That figure was $821 million in HUBS’s case. Sealed Air Corporation (NYSE:SEE) is the most popular stock in this table. On the other hand Israel Chemicals Ltd. (NYSE:ICL) is the least popular one with only 5 bullish hedge fund positions. Compared to these stocks HubSpot Inc (NYSE:HUBS) is more popular among hedge funds. Our calculations showed that top 20 most popular stocks among hedge funds returned 41.1% in 2019 through December 23rd and outperformed the S&P 500 ETF (SPY) by 10.1 percentage points. Unfortunately HUBS wasn’t nearly as popular as these 20 stocks and hedge funds that were betting on HUBS were disappointed as the stock returned 25% so far in 2019 (through 12/23) and trailed the market. If you are interested in investing in large cap stocks with huge upside potential, you should check out the top 20 most popular stocks among hedge funds as 65 percent of these stocks already outperformed the market in 2019.