How Did Chegg Inc (CHGG) Compare Against Top Hedge Fund Stocks in 2019?

Chegg Inc (NYSE:CHGG) was in 32 hedge funds’ portfolios at the end of September. CHGG investors should pay attention to an increase in activity from the world’s largest hedge funds in recent months. There were 26 hedge funds in our database with CHGG holdings at the end of the previous quarter. Our calculations also showed that CHGG isn’t among the 30 most popular stocks among hedge funds (click for Q3 rankings and see the video at the end of this article for Q2 rankings).

To the average investor there are dozens of methods shareholders can use to grade their holdings. A couple of the less utilized methods are hedge fund and insider trading indicators. Our researchers have shown that, historically, those who follow the best picks of the elite hedge fund managers can trounce the market by a superb margin (see the details here).

We leave no stone unturned when looking for the next great investment idea. For example Discover is offering this insane cashback card, so we look into shorting the stock. One of the most bullish analysts in America just put his money where his mouth is. He says, “I’m investing more today than I did back in early 2009.” So we check out his pitch. We read hedge fund investor letters and listen to stock pitches at hedge fund conferences. We even check out this option genius’ weekly trade ideas. This December, we recommended Adams Energy as a one-way bet based on an under-the-radar fund manager’s investor letter and the stock already gained 20 percent. Now let’s take a gander at the key hedge fund action surrounding Chegg Inc (NYSE:CHGG).

How have hedgies been trading Chegg Inc (NYSE:CHGG)?

At the end of the third quarter, a total of 32 of the hedge funds tracked by Insider Monkey were long this stock, a change of 23% from the previous quarter. On the other hand, there were a total of 21 hedge funds with a bullish position in CHGG a year ago. With hedge funds’ capital changing hands, there exists a select group of notable hedge fund managers who were boosting their holdings substantially (or already accumulated large positions). 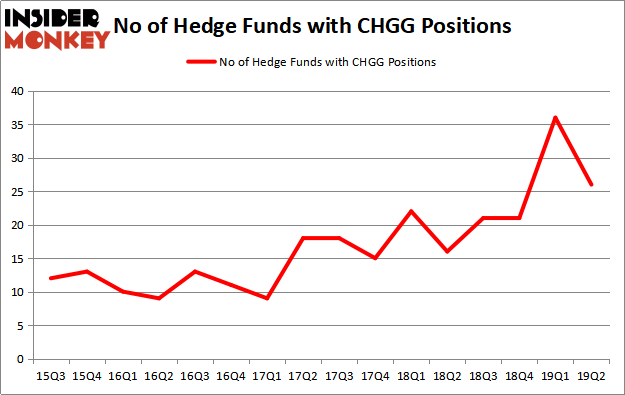 According to publicly available hedge fund and institutional investor holdings data compiled by Insider Monkey, Sylebra Capital Management, managed by Daniel Patrick Gibson, holds the most valuable position in Chegg Inc (NYSE:CHGG). Sylebra Capital Management has a $104.3 million position in the stock, comprising 4.6% of its 13F portfolio. The second most bullish fund manager is Citadel Investment Group, led by Ken Griffin, holding a $30.9 million position; less than 0.1%% of its 13F portfolio is allocated to the company. Remaining professional money managers that are bullish consist of James Crichton’s Hitchwood Capital Management, David E. Shaw’s D E Shaw and Brian Ashford-Russell and Tim Woolley’s Polar Capital. In terms of the portfolio weights assigned to each position Act II Capital allocated the biggest weight to Chegg Inc (NYSE:CHGG), around 8.62% of its 13F portfolio. Selkirk Management is also relatively very bullish on the stock, earmarking 5.46 percent of its 13F equity portfolio to CHGG.

Consequently, specific money managers have been driving this bullishness. Black-and-White Capital, managed by Seth Wunder, initiated the most valuable position in Chegg Inc (NYSE:CHGG). Black-and-White Capital had $6 million invested in the company at the end of the quarter. Paul Reeder’s PAR Capital Management also initiated a $1.5 million position during the quarter. The other funds with new positions in the stock are Franklin Parlamis’s Aequim Alternative Investments, Renee Yao’s Neo Ivy Capital, and Minhua Zhang’s Weld Capital Management.

As you can see these stocks had an average of 14.75 hedge funds with bullish positions and the average amount invested in these stocks was $130 million. That figure was $337 million in CHGG’s case. First Hawaiian, Inc. (NASDAQ:FHB) is the most popular stock in this table. On the other hand LivaNova PLC (NASDAQ:LIVN) is the least popular one with only 13 bullish hedge fund positions. Compared to these stocks Chegg Inc (NYSE:CHGG) is more popular among hedge funds. Our calculations showed that top 20 most popular stocks among hedge funds returned 41.1% in 2019 through December 23rd and outperformed the S&P 500 ETF (SPY) by 10.1 percentage points. Hedge funds were also right about betting on CHGG, though not to the same extent, as the stock returned 33.8% during the same period and outperformed the market as well.