How Did American Tower Corporation (AMT) Compare Against Hedge Fund Darlings in 2019?

Investing in hedge funds can bring large profits, but it’s not for everybody, since hedge funds are available only for high-net-worth individuals. They generate significant returns for investors to justify their large fees and they allocate a lot of time and employ complex research processes to determine the best stocks to invest in. A particularly interesting group of stocks that hedge funds like is the small-caps. The huge amount of capital does not allow hedge funds to invest a lot in small-caps, but our research showed that their most popular small-cap ideas are less efficiently priced and generate stronger returns than their large- and mega-cap picks and the broader market. That is why we pay special attention to the hedge fund activity in the small-cap space. Nevertheless, it is also possible to find underpriced large-cap stocks by following the hedge funds’ moves. In this article, we look at what those funds think of American Tower Corporation (NYSE:AMT) based on that data.

Is American Tower Corporation (NYSE:AMT) the right investment to pursue these days? Hedge funds are buying. The number of long hedge fund bets increased by 4 lately. Our calculations also showed that AMT isn’t among the 30 most popular stocks among hedge funds (click for Q3 rankings and see the video at the end of this article for Q2 rankings).

We leave no stone unturned when looking for the next great investment idea. For example Discover is offering this insane cashback card, so we look into shorting the stock. One of the most bullish analysts in America just put his money where his mouth is. He says, “I’m investing more today than I did back in early 2009.” So we check out his pitch. We read hedge fund investor letters and listen to stock pitches at hedge fund conferences. We even check out this option genius’ weekly trade ideas. This December, we recommended Adams Energy as a one-way bet based on an under-the-radar fund manager’s investor letter and the stock already gained 20 percent. Now let’s analyze the fresh hedge fund action surrounding American Tower Corporation (NYSE:AMT).

What have hedge funds been doing with American Tower Corporation (NYSE:AMT)?

Heading into the fourth quarter of 2019, a total of 46 of the hedge funds tracked by Insider Monkey held long positions in this stock, a change of 10% from one quarter earlier. The graph below displays the number of hedge funds with bullish position in AMT over the last 17 quarters. With hedgies’ sentiment swirling, there exists a few notable hedge fund managers who were increasing their stakes significantly (or already accumulated large positions). 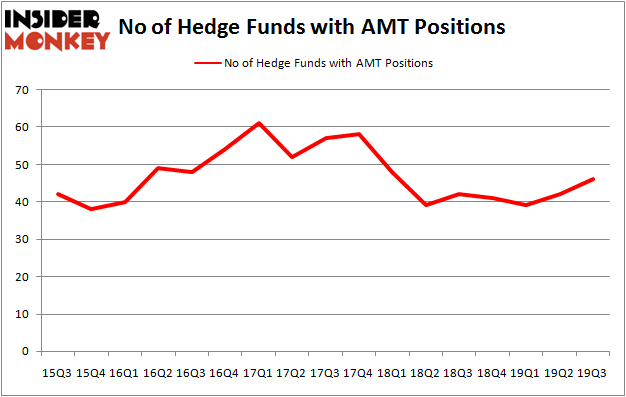 According to Insider Monkey’s hedge fund database, Charles Akre’s Akre Capital Management has the largest position in American Tower Corporation (NYSE:AMT), worth close to $1.5891 billion, amounting to 15.7% of its total 13F portfolio. Sitting at the No. 2 spot is William von Mueffling of Cantillon Capital Management, with a $470 million position; 4.6% of its 13F portfolio is allocated to the company. Remaining members of the smart money that hold long positions consist of Renaissance Technologies, Stuart J. Zimmer’s Zimmer Partners and Panayotis Takis Sparaggis’s Alkeon Capital Management. In terms of the portfolio weights assigned to each position Akre Capital Management allocated the biggest weight to American Tower Corporation (NYSE:AMT), around 15.67% of its 13F portfolio. Claar Advisors is also relatively very bullish on the stock, earmarking 7.97 percent of its 13F equity portfolio to AMT.

As aggregate interest increased, key money managers have been driving this bullishness. Bridgewater Associates, managed by Ray Dalio, created the largest position in American Tower Corporation (NYSE:AMT). Bridgewater Associates had $21.9 million invested in the company at the end of the quarter. David Fiszel’s Honeycomb Asset Management also made a $11.1 million investment in the stock during the quarter. The other funds with new positions in the stock are Joe DiMenna’s ZWEIG DIMENNA PARTNERS, Parvinder Thiara’s Athanor Capital, and Mike Vranos’s Ellington.

As you can see these stocks had an average of 27 hedge funds with bullish positions and the average amount invested in these stocks was $971 million. That figure was $3646 million in AMT’s case. 3M Company (NYSE:MMM) is the most popular stock in this table. On the other hand PetroChina Company Limited (NYSE:PTR) is the least popular one with only 11 bullish hedge fund positions. Compared to these stocks American Tower Corporation (NYSE:AMT) is more popular among hedge funds. Our calculations showed that top 20 most popular stocks among hedge funds returned 41.1% in 2019 through December 23rd and outperformed the S&P 500 ETF (SPY) by 10.1 percentage points. Hedge funds were also right about betting on AMT as the stock returned 45.4% so far in 2019 (through 12/23) and outperformed the market by an even larger margin. Hedge funds were clearly right about piling into this stock relative to other stocks with similar market capitalizations.