How Did AGCO Corporation (AGCO) Perform In Comparison to Hedge Fund Favorites in 2019?

While the market driven by short-term sentiment influenced by the accomodative interest rate environment in the US, increasing oil prices and deteriorating expectations towards the resolution of the trade war with China, many smart money investors kept their cautious approach regarding the current bull run in the third quarter and hedging or reducing many of their long positions. Some fund managers are betting on Dow hitting 40,000 to generate strong returns. However, as we know, big investors usually buy stocks with strong fundamentals that can deliver gains both in bull and bear markets, which is why we believe we can profit from imitating them. In this article, we are going to take a look at the smart money sentiment surrounding AGCO Corporation (NYSE:AGCO) and see how the stock performed in comparison to hedge funds’ consensus picks.

AGCO Corporation (NYSE:AGCO) was in 24 hedge funds’ portfolios at the end of September. AGCO shareholders have witnessed a decrease in enthusiasm from smart money recently. There were 25 hedge funds in our database with AGCO holdings at the end of the previous quarter. Our calculations also showed that AGCO isn’t among the 30 most popular stocks among hedge funds (click for Q3 rankings and see the video at the end of this article for Q2 rankings).

In the eyes of most market participants, hedge funds are seen as worthless, outdated investment vehicles of the past. While there are more than 8000 funds trading at present, We look at the moguls of this club, about 750 funds. These money managers shepherd bulk of all hedge funds’ total capital, and by monitoring their inimitable equity investments, Insider Monkey has figured out many investment strategies that have historically outpaced the market. Insider Monkey’s flagship short hedge fund strategy beat the S&P 500 short ETFs by around 20 percentage points per annum since its inception in May 2014. Our portfolio of short stocks lost 27.8% since February 2017 (through November 21st) even though the market was up more than 39% during the same period. We just shared a list of 7 short targets in our latest quarterly update .

We leave no stone unturned when looking for the next great investment idea. For example Europe is set to become the world’s largest cannabis market, so we check out this European marijuana stock pitch. We read hedge fund investor letters and listen to stock pitches at hedge fund conferences. This December, we recommended Adams Energy as a one-way bet based on an under-the-radar fund manager’s investor letter and the stock is still extremely cheap despite already gaining 20 percent. Keeping this in mind let’s check out the fresh hedge fund action encompassing AGCO Corporation (NYSE:AGCO).

At the end of the third quarter, a total of 24 of the hedge funds tracked by Insider Monkey held long positions in this stock, a change of -4% from one quarter earlier. Below, you can check out the change in hedge fund sentiment towards AGCO over the last 17 quarters. With hedgies’ positions undergoing their usual ebb and flow, there exists a select group of notable hedge fund managers who were increasing their holdings considerably (or already accumulated large positions). 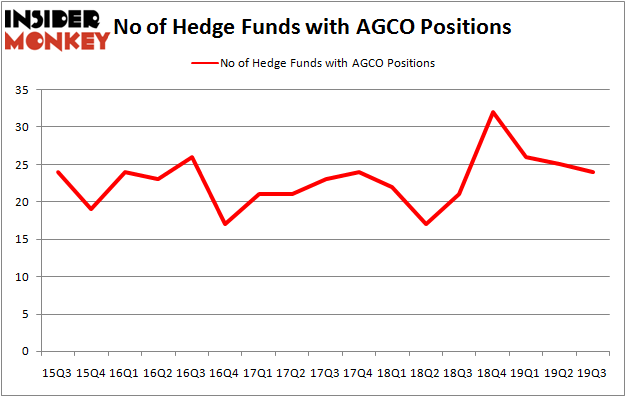 More specifically, AQR Capital Management was the largest shareholder of AGCO Corporation (NYSE:AGCO), with a stake worth $90.9 million reported as of the end of September. Trailing AQR Capital Management was Maverick Capital, which amassed a stake valued at $49.7 million. Arrowstreet Capital, Impax Asset Management, and Citadel Investment Group were also very fond of the stock, becoming one of the largest hedge fund holders of the company. In terms of the portfolio weights assigned to each position Maverick Capital allocated the biggest weight to AGCO Corporation (NYSE:AGCO), around 0.73% of its 13F portfolio. Impax Asset Management is also relatively very bullish on the stock, dishing out 0.32 percent of its 13F equity portfolio to AGCO.

Judging by the fact that AGCO Corporation (NYSE:AGCO) has experienced a decline in interest from the smart money, it’s safe to say that there lies a certain “tier” of fund managers that decided to sell off their entire stakes last quarter. At the top of the heap, Javier Velazquez’s Albar Capital said goodbye to the biggest stake of the 750 funds tracked by Insider Monkey, totaling close to $6.7 million in stock. Nick Niell’s fund, Arrowgrass Capital Partners, also cut its stock, about $5 million worth. These bearish behaviors are intriguing to say the least, as aggregate hedge fund interest dropped by 1 funds last quarter.

Let’s check out hedge fund activity in other stocks – not necessarily in the same industry as AGCO Corporation (NYSE:AGCO) but similarly valued. We will take a look at Kinross Gold Corporation (NYSE:KGC), Toll Brothers Inc (NYSE:TOL), CACI International Inc (NYSE:CACI), and Herbalife Nutrition Ltd. (NYSE:HLF). All of these stocks’ market caps are closest to AGCO’s market cap.

As you can see these stocks had an average of 23.75 hedge funds with bullish positions and the average amount invested in these stocks was $1024 million. That figure was $243 million in AGCO’s case. Kinross Gold Corporation (NYSE:KGC) is the most popular stock in this table. On the other hand Toll Brothers Inc (NYSE:TOL) is the least popular one with only 22 bullish hedge fund positions. AGCO Corporation (NYSE:AGCO) is not the most popular stock in this group but hedge fund interest is still above average. Our calculations showed that top 20 most popular stocks among hedge funds returned 41.3% in 2019 and outperformed the S&P 500 ETF (SPY) by 10.1 percentage points. Hedge funds were also right about betting on AGCO, though not to the same extent, as the stock returned 40% during 2019 and outperformed the market as well.