With all of this in mind, let’s view the recent action encompassing AstraZeneca plc (ADR) (NYSE:AZN).

How have hedgies been trading AstraZeneca plc (ADR) (NYSE:AZN)?

Heading into the fourth quarter of 2016, a total of 27 of the hedge funds tracked by Insider Monkey were long this stock, a change of 13% from the second quarter of 2016. With hedgies’ sentiment swirling, there exists an “upper tier” of key hedge fund managers who were boosting their holdings substantially (or already accumulated large positions). 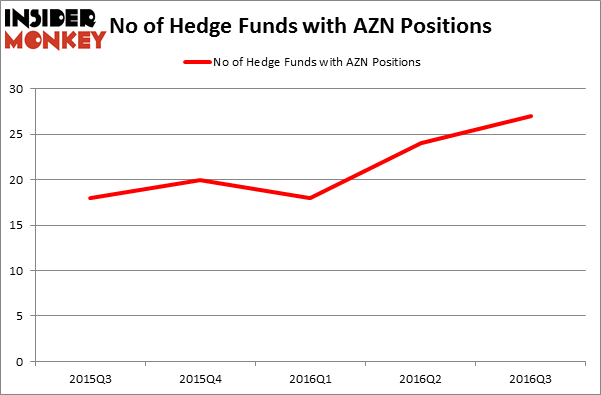 When looking at the institutional investors followed by Insider Monkey, Renaissance Technologies, led by Jim Simons, holds the largest position in AstraZeneca plc (ADR) (NYSE:AZN). Renaissance Technologies has a $187.4 million position in the stock, comprising 0.3% of its 13F portfolio. The second most bullish fund manager is Viking Global, led by Andreas Halvorsen, which holds a $137.2 million position; 0.6% of its 13F portfolio is allocated to the company. Remaining hedge funds and institutional investors that hold long positions encompass Ken Fisher’s Fisher Asset Management, Israel Englander’s Millennium Management and Peter Rathjens, Bruce Clarke and John Campbell’s Arrowstreet Capital. We should note that none of these hedge funds are among our list of the 100 best performing hedge funds which is based on the performance of their 13F long positions in non-microcap stocks.

As you can see these stocks had an average of 38.5 hedge funds with bullish positions and the average amount invested in these stocks was $2298 million. That figure was $669 million in AZN’s case. Union Pacific Corporation (NYSE:UNP) is the most popular stock in this table. On the other hand Westpac Banking Corporation (ADR) (NYSE:WBK) is the least popular one with only 5 bullish hedge fund positions. AstraZeneca plc (ADR) (NYSE:AZN) is not the least popular stock in this group but hedge fund interest is still below average. This is a slightly negative signal and we’d rather spend our time researching stocks that hedge funds are piling on. In this regard UNP might be a better candidate to consider a long position.