Hormel Foods Corporation (NYSE:HRL), the maker of iconic canned meat Spam, has surprisingly been one of the most impressive growth stocks of the decade. The stock has risen 240% over the past ten years and nearly 80% over the past five – leaving the S&P 500 in the dust. It has also outperformed major competitors such as ConAgra Foods, Inc. (NYSE:CAG) and Tyson Foods, Inc. (NYSE:TSN). What factors propelled this seemingly ordinary stock to new highs, and should investors take note? 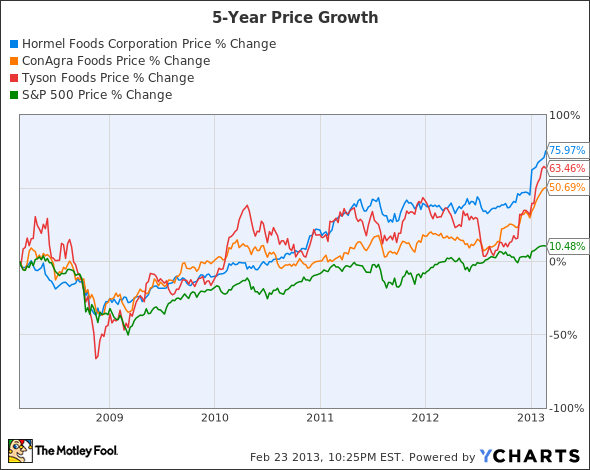 Besides Spam, Hormel generates revenue from five main segments: grocery products, refrigerated foods, the Jennie-O Turkey Store, specialty foods and other products – which include nutritional food and gelatin products. Meat products are a large part of Hormel’s product line – which include both perishable fresh meat as well as shelf-stable canned meat. Its shelf-stable canned products also include stews, tortilla chips, salsa and Skippy peanut butter – which it recently acquired for $700 million.

Hormel’s refrigerated foods segment, which comprises approximately half of its total revenue, posted a sales decline of 1.9% to $1.06 billion – missing Wall Street’ estimate of $1.10 billion. Operating profit was flat from the previous year.

Its Jennie-O Turkey Store segment, which generates 18% of Hormel’s revenue, generated $390.3 million in sales, missing the consensus estimate by $5 million. Operating profit also slid 23% from the prior year quarter. Hormel expects the segment to post even weaker growth in 2012.

Despite these declines, Hormel still raised its full-year forecast by three cents, up to a range between $1.93 and $2.03. That’s in line with the average analyst forecast of $1.97.

The Global Cult of Spam

Despite its lowly, often-ridiculed reputation in the continental United States, Hormel’s Spam has a strong following in other markets – owing to its portability and durability. In Hawaii, Spam is a main ingredient in several local dishes, including Spam Sushi.

Spam is also popular in China, Japan, South Korea and the Philippines. In Japan and South Korea, Spam is used as a quick substitute for more wholesome meat, and is usually used to complement rice dishes or noodles. The Chinese use Spam in fried noodles and sandwiches, while Filipinos use Spam in breakfast sandwiches.

Hormel’s Spam has an enviable cult following across the world, which has fueled its growth in emerging markets. The diverse adaptability of the meat, in contrast to regular sliced ham, is its core strength.

ConAgra is the parent company of Chef Boyardee, Hebrew International, Hunt’s, Orville Redenbacher and Swiss Miss. Mondelez was formerly Kraft’s packaged foods division, and creates some of the most well-known brands in the world – such as Oreo, Cadbury, Nabisco and Trident. B&G’s is comparably smaller, and is best known for its Accent and Mrs. Dash spice products.

Since Hormel is trading near all-time highs, its P/E and PEG ratios are now at a premium to its peers, which make it slightly overvalued. However, the stock still has strong momentum, considering its robust Return on Equity over the past twelve months. Low debt levels are also a boon for the company.