Although I am unaware of the Galactic Republic having a Kenobi Skywalker Industrial Average, wouldn’t it be cool if you could invest like a Jedi?  Well, here’s a couple of Jedi-like investments that would make even master Yoda proud.

One of the most memorable scenes from the original trilogy was the holographic image of Princess Leia pleading “help me Obi Wan Kenobi.”  The technology to produce a holographic image isn’t available yet, but we may be much closer than you think.

Fox News reported that Hewlett-Packard Company (NYSE:HPQ) has developed 3D for mobile devices where you don’t need to wear glasses.  Now, that isn’t entirely new, but what HP has been able to achieve is.  “HP’s researchers have found a way to make images viewable in 3-D from angles up to 45 degrees from center in any direction –up, down, side-to-side or diagonally. That means viewers can see a person’s face with one ear blocked from view, but reveal the ear by swiveling the screen.” I think I speak for us all when I say that sounds pretty cool.

I’ve been very critical of HP lately, as they have been restructuring the company.  Big time problems remain, like low margins in their printer operations, and their difficulty entering the tablet and smartphone arena.  It seemed that Hewlett-Packard Company (NYSE:HPQ) was no longer able to innovate, and CEO Meg Whitman’s cost cutting seemed to be further proof this company was done for.  But the fact that HP has been able to develop this kind of technology gives the company a flicker of hope.  The commercial value for this 3D technology is a long ways off yet.  But to me, this company is now a wildcard.

In the meantime, one company that is benefiting a lot from 3D and HD technology is IMAX Corporation (USA) (NYSE:IMAX). Imax’s main revenue comes by providing people with a superior theater experience to watch their favorite Hollywood blockbusters.  The customer experience that they offer seems to be giving movie buffs what they want. 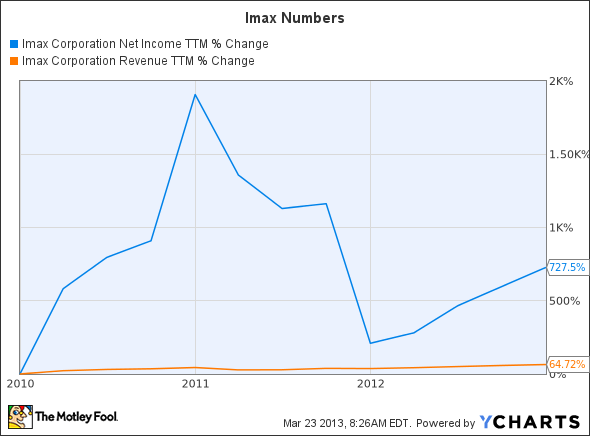 Over the past three years, IMAX Corporation (USA) (NYSE:IMAX) has been growing revenue at decent pace.  The revenue comes mostly from agreements to convert movies into a format that is conducive to Imax Theaters.  These operations have caused Imax’s profit to soar during this time.

Trends seem to indicate that more and more people are willing to spend a little more for a premium movie experience.  Given this trend, and the increase in the number of Imax Theaters, I expect IMAX Corporation (USA) (NYSE:IMAX) to continue to benefit and profit.

In the wake of losing his hand to his own father, and amid his deep inner turmoil, Luke Skywalker was being retrofitted with a new hand by medical robots.  Believe it or not, bionic appendages that you move with your brain are now completely possible.  It seems that modern medicine has come a long ways from the leech days.  But more than just bionic arms and legs, modern medicine now has the option of robotic surgery.

Intuitive Surgical had a slow start in marketing their da Vinci Surgical System because of the start-up cost and the newness of the technology.  But sales have picked up speed, and the total count has surpassed 2,000 units around the world.  This is what Intuitive Surgical, Inc. (NASDAQ:ISRG) wants, because once they have sold the unit, the profits come from maintaining the equipment.  This past year, over half of their revenue was from these recurring sources.  As time goes by, this company will become less dependent on selling units, and more dependent on recurring revenue.