Insider Monkey has processed numerous 13F filings of hedge funds and successful value investors to create an extensive database of hedge fund holdings. The 13F filings show the hedge funds’ and successful investors’ positions as of the end of the first quarter. You can find articles about an individual hedge fund’s trades on numerous financial news websites. However, in this article we will take a look at their collective moves over the last 4.5 years and analyze what the smart money thinks of Hess Corporation (NYSE:HES) based on that data.

Is Hess Corporation (NYSE:HES) ready to rally soon? The smart money is taking a bearish view. The number of bullish hedge fund positions dropped by 6 lately. Our calculations also showed that HES isn’t among the 30 most popular stocks among hedge funds (click for Q1 rankings and see the video for a quick look at the top 5 stocks). HES was in 28 hedge funds’ portfolios at the end of the first quarter of 2020. There were 34 hedge funds in our database with HES positions at the end of the previous quarter.

At Insider Monkey we leave no stone unturned when looking for the next great investment idea. For example, 2020’s unprecedented market conditions provide us with the highest number of trading opportunities in a decade. So we are checking out trades like this one as well as this tiny lithium play. We read hedge fund investor letters and listen to stock pitches at hedge fund conferences. Our best call in 2020 was shorting the market when the S&P 500 was trading at 3150 after realizing the coronavirus pandemic’s significance before most investors. Keeping this in mind let’s take a peek at the key hedge fund action regarding Hess Corporation (NYSE:HES). 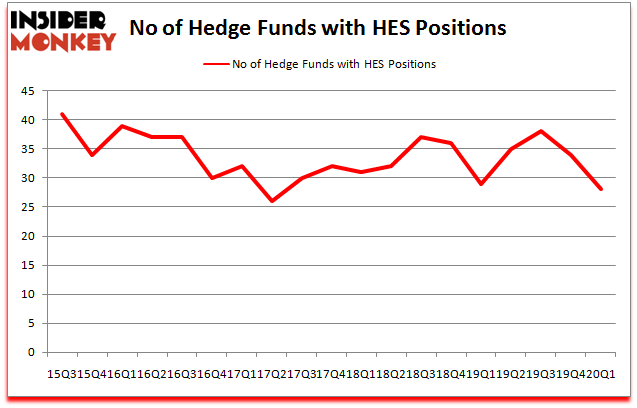 Among these funds, Fisher Asset Management held the most valuable stake in Hess Corporation (NYSE:HES), which was worth $84.8 million at the end of the third quarter. On the second spot was Citadel Investment Group which amassed $66.5 million worth of shares. Citadel Investment Group, Balyasny Asset Management, and Two Sigma Advisors were also very fond of the stock, becoming one of the largest hedge fund holders of the company. In terms of the portfolio weights assigned to each position Game Creek Capital allocated the biggest weight to Hess Corporation (NYSE:HES), around 3.55% of its 13F portfolio. Leucadia National is also relatively very bullish on the stock, setting aside 2.49 percent of its 13F equity portfolio to HES.

Due to the fact that Hess Corporation (NYSE:HES) has faced bearish sentiment from the entirety of the hedge funds we track, it’s safe to say that there lies a certain “tier” of hedgies that elected to cut their full holdings heading into Q4. It’s worth mentioning that Robert Bishop’s Impala Asset Management said goodbye to the biggest investment of the “upper crust” of funds monitored by Insider Monkey, valued at close to $98.9 million in stock, and Michael A. Price and Amos Meron’s Empyrean Capital Partners was right behind this move, as the fund said goodbye to about $63.3 million worth. These transactions are interesting, as total hedge fund interest dropped by 6 funds heading into Q4.

As you can see these stocks had an average of 31.75 hedge funds with bullish positions and the average amount invested in these stocks was $347 million. That figure was $253 million in HES’s case. KeyCorp (NYSE:KEY) is the most popular stock in this table. On the other hand GSX Techedu Inc. (NYSE:GSX) is the least popular one with only 13 bullish hedge fund positions. Hess Corporation (NYSE:HES) is not the least popular stock in this group but hedge fund interest is still below average. Our calculations showed that top 10 most popular stocks among hedge funds returned 41.4% in 2019 and outperformed the S&P 500 ETF (SPY) by 10.1 percentage points. These stocks gained 8.3% in 2020 through the end of May and still beat the market by 13.2 percentage points. A small number of hedge funds were also right about betting on HES as the stock returned 42.6% during the second quarter and outperformed the market by an even larger margin.