Is SunTrust Banks, Inc. (NYSE:STI) a buy, sell, or hold? Investors who are in the know are in an optimistic mood. The number of long hedge fund bets went up by 12 in recent months. Our calculations also showed that STI isn’t among the 30 most popular stocks among hedge funds. STI was in 34 hedge funds’ portfolios at the end of December. There were 22 hedge funds in our database with STI positions at the end of the previous quarter. 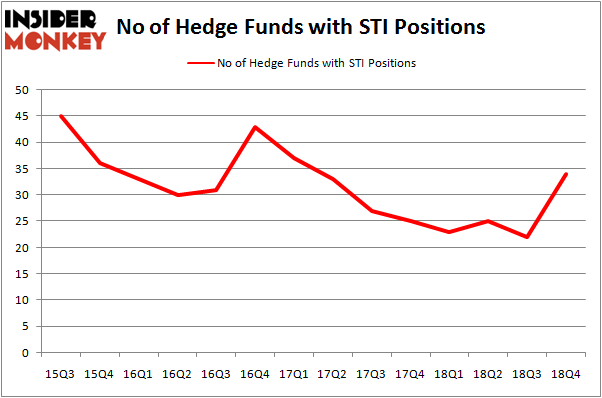 More specifically, Carlson Capital was the largest shareholder of SunTrust Banks, Inc. (NYSE:STI), with a stake worth $108.7 million reported as of the end of September. Trailing Carlson Capital was Arrowstreet Capital, which amassed a stake valued at $96.4 million. Two Sigma Advisors, Sirios Capital Management, and Renaissance Technologies were also very fond of the stock, giving the stock large weights in their portfolios.

Consequently, some big names have been driving this bullishness. Carlson Capital, managed by Clint Carlson, created the biggest position in SunTrust Banks, Inc. (NYSE:STI). Carlson Capital had $108.7 million invested in the company at the end of the quarter. John Brennan’s Sirios Capital Management also made a $51.3 million investment in the stock during the quarter. The following funds were also among the new STI investors: Jim Simons’s Renaissance Technologies, Paul Marshall and Ian Wace’s Marshall Wace LLP, and Mike Masters’s Masters Capital Management.

Let’s check out hedge fund activity in other stocks – not necessarily in the same industry as SunTrust Banks, Inc. (NYSE:STI) but similarly valued. We will take a look at Brown-Forman Corporation (NYSE:BF), Interactive Brokers Group, Inc. (NASDAQ:IBKR), Fortive Corporation (NYSE:FTV), and The Hershey Company (NYSE:HSY). All of these stocks’ market caps match STI’s market cap.

As you can see these stocks had an average of 26.25 hedge funds with bullish positions and the average amount invested in these stocks was $657 million. That figure was $620 million in STI’s case. The Hershey Company (NYSE:HSY) is the most popular stock in this table. On the other hand Brown-Forman Corporation (NYSE:BF) is the least popular one with only 21 bullish hedge fund positions. Compared to these stocks SunTrust Banks, Inc. (NYSE:STI) is more popular among hedge funds. Considering that hedge funds are fond of this stock in relation to its market cap peers, it may be a good idea to analyze it in detail and potentially include it in your portfolio. Our calculations showed that top 15 most popular stocks among hedge funds returned 19.7% through March 15th and outperformed the S&P 500 ETF (SPY) by 6.6 percentage points. Hedge funds were also right about betting on STI as the stock returned 27.5% and outperformed the market as well.