Is Corning Incorporated (NYSE:GLW) a healthy stock for your portfolio? Hedge funds are becoming hopeful. The number of long hedge fund positions advanced by 3 recently. Our calculations also showed that GLW isn’t among the 30 most popular stocks among hedge funds.

At the end of the fourth quarter, a total of 30 of the hedge funds tracked by Insider Monkey were long this stock, a change of 11% from the second quarter of 2018. Below, you can check out the change in hedge fund sentiment towards GLW over the last 14 quarters. With the smart money’s capital changing hands, there exists a select group of key hedge fund managers who were boosting their holdings significantly (or already accumulated large positions). 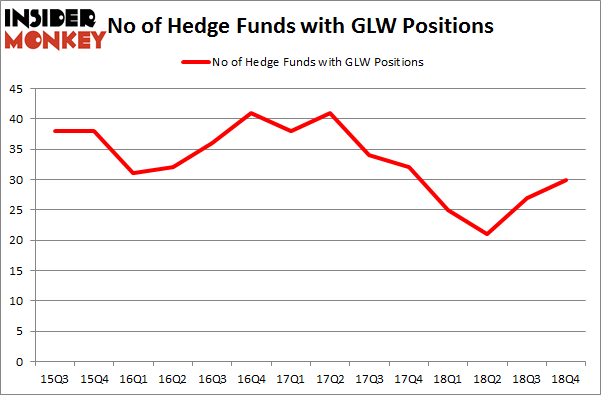 The largest stake in Corning Incorporated (NYSE:GLW) was held by Millennium Management, which reported holding $100.6 million worth of stock at the end of September. It was followed by Two Sigma Advisors with a $69.7 million position. Other investors bullish on the company included Valueworks LLC, Yacktman Asset Management, and Citadel Investment Group.

With a general bullishness amongst the heavyweights, key money managers have been driving this bullishness. Gotham Asset Management, managed by Joel Greenblatt, created the most valuable position in Corning Incorporated (NYSE:GLW). Gotham Asset Management had $26.3 million invested in the company at the end of the quarter. Peter Rathjens, Bruce Clarke and John Campbell’s Arrowstreet Capital also made a $4.3 million investment in the stock during the quarter. The following funds were also among the new GLW investors: Matthew Tewksbury’s Stevens Capital Management, Nick Niell’s Arrowgrass Capital Partners, and Matthew Hulsizer’s PEAK6 Capital Management.

As you can see these stocks had an average of 29.5 hedge funds with bullish positions and the average amount invested in these stocks was $1140 million. That figure was $457 million in GLW’s case. Worldpay, Inc. (NYSE:WP) is the most popular stock in this table. On the other hand MPLX LP (NYSE:MPLX) is the least popular one with only 11 bullish hedge fund positions. Corning Incorporated (NYSE:GLW) is not the most popular stock in this group but hedge fund interest is still above average. This is a slightly positive signal but we’d rather spend our time researching stocks that hedge funds are piling on. Our calculations showed that top 15 most popular stocks among hedge funds returned 19.7% through March 15th and outperformed the S&P 500 ETF (SPY) by 6.6 percentage points. Hedge funds were also right about betting on GLW, though not to the same extent, as the stock returned 14.9% and outperformed the market as well.

Were Hedge Funds Right About Flocking Into Sempra Energy (SRE)?
Monthly Newsletter Strategy
Download a free copy of our newsletter and see the details inside!
Hedge Fund Resource Center
Related News
Is Corning Incorporated (GLW) A Good Stock To Buy? Analysts Chime in on Corning, Quest Diagnostics, Canadian Pacific, Norfolk Southern, and More Is Corning Incorporated (GLW) the Right Stock for Your Portfolio? ValueWorks’ Top Pick From Each of 5 Prominent Sectors: Gilead (GILD), Boeing (BA), More Why Apple, Microsoft, Corning, Ariad, and More Are in the Spotlight Can Anything Slow Down These Five Stocks? 5 NYSE Stocks Hitting 52-Week Highs Yesterday Ten of the Most Common Addictions 13 African Countries with the Largest White Population in 2018 6 Causes of Human Trafficking in Africa, India, and US
Billionaire Hedge Funds