Is Five Point Holdings, LLC (NYSE:FPH) worth your attention right now? Prominent investors are taking an optimistic view. The number of bullish hedge fund positions moved up by 4 recently. Our calculations also showed that FPH isn’t among the 30 most popular stocks among hedge funds. FPH was in 16 hedge funds’ portfolios at the end of the fourth quarter of 2018. There were 12 hedge funds in our database with FPH holdings at the end of the previous quarter.

At the end of the fourth quarter, a total of 16 of the hedge funds tracked by Insider Monkey held long positions in this stock, a change of 33% from the second quarter of 2018. By comparison, 15 hedge funds held shares or bullish call options in FPH a year ago. With hedgies’ capital changing hands, there exists a select group of notable hedge fund managers who were increasing their holdings considerably (or already accumulated large positions). 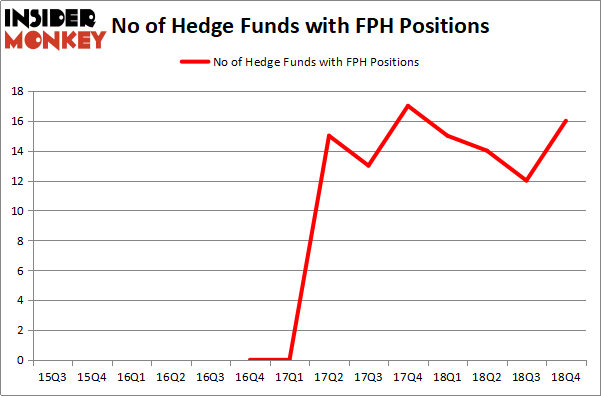 Of the funds tracked by Insider Monkey, Martin Whitman’s Third Avenue Management has the number one position in Five Point Holdings, LLC (NYSE:FPH), worth close to $79.4 million, accounting for 6.4% of its total 13F portfolio. The second largest stake is held by Kevin Michael Ulrich and Anthony Davis of Anchorage Advisors, with a $68.5 million position; 3.9% of its 13F portfolio is allocated to the company. Remaining peers that are bullish contain John Khoury’s Long Pond Capital, Matthew Barrett’s Glendon Capital Management and Michael Blitzer’s Kingstown Capital Management.

As one would reasonably expect, key hedge funds have been driving this bullishness. Scion Asset Management, managed by Michael Burry, initiated the biggest position in Five Point Holdings, LLC (NYSE:FPH). Scion Asset Management had $9.2 million invested in the company at the end of the quarter. Thomas Ellis and Todd Hammer’s North Run Capital also made a $3.3 million investment in the stock during the quarter. The other funds with brand new FPH positions are Jerome L. Simon’s Lonestar Capital Management, Youlia Miteva’s Proxima Capital Management, and John A. Levin’s Levin Capital Strategies.

As you can see these stocks had an average of 14 hedge funds with bullish positions and the average amount invested in these stocks was $138 million. That figure was $242 million in FPH’s case. Insmed Incorporated (NASDAQ:INSM) is the most popular stock in this table. On the other hand Group 1 Automotive, Inc. (NYSE:GPI) is the least popular one with only 9 bullish hedge fund positions. Five Point Holdings, LLC (NYSE:FPH) is not the most popular stock in this group but hedge fund interest is still above average. Our calculations showed that top 15 most popular stocks) among hedge funds returned 24.2% through April 22nd and outperformed the S&P 500 ETF (SPY) by more than 7 percentage points. Hedge funds were also right about betting on FPH, though not to the same extent, as the stock returned 19.3% and outperformed the market as well.