Is Zai Lab Limited (NASDAQ:ZLAB) a good equity to bet on right now? We like to check what the smart money thinks first before doing extensive research. Although there have been several high profile failed hedge fund picks, the consensus picks among hedge fund investors have historically outperformed the market after adjusting for known risk attributes. It’s not surprising given that hedge funds have access to better information and more resources to find the winners in the stock market.

Zai Lab Limited (NASDAQ:ZLAB) was in 16 hedge funds’ portfolios at the end of December. ZLAB has seen a decrease in activity from the world’s largest hedge funds in recent months. There were 20 hedge funds in our database with ZLAB holdings at the end of the previous quarter. Our calculations also showed that ZLAB isn’t among the 30 most popular stocks among hedge funds. 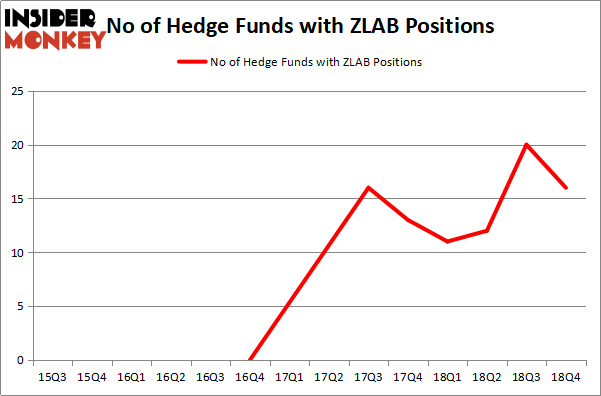 More specifically, Segantii Capital was the largest shareholder of Zai Lab Limited (NASDAQ:ZLAB), with a stake worth $55.7 million reported as of the end of December. Trailing Segantii Capital was OrbiMed Advisors, which amassed a stake valued at $40.7 million. Cormorant Asset Management, EcoR1 Capital, and Rock Springs Capital Management were also very fond of the stock, giving the stock large weights in their portfolios.

Due to the fact that Zai Lab Limited (NASDAQ:ZLAB) has witnessed declining sentiment from the aggregate hedge fund industry, we can see that there exists a select few fund managers that elected to cut their positions entirely last quarter. Intriguingly, David Halpert’s Prince Street Capital Management cut the biggest stake of the “upper crust” of funds monitored by Insider Monkey, totaling an estimated $2.1 million in stock, and Anand Parekh’s Alyeska Investment Group was right behind this move, as the fund sold off about $1.3 million worth. These moves are important to note, as total hedge fund interest dropped by 4 funds last quarter.

Let’s now take a look at hedge fund activity in other stocks – not necessarily in the same industry as Zai Lab Limited (NASDAQ:ZLAB) but similarly valued. We will take a look at Air Transport Services Group Inc. (NASDAQ:ATSG), Mueller Industries, Inc. (NYSE:MLI), Rush Enterprises, Inc. (NASDAQ:RUSHA), and Kronos Worldwide, Inc. (NYSE:KRO). All of these stocks’ market caps are closest to ZLAB’s market cap.

As you can see these stocks had an average of 14.5 hedge funds with bullish positions and the average amount invested in these stocks was $122 million. That figure was $163 million in ZLAB’s case. Rush Enterprises, Inc. (NASDAQ:RUSHA) is the most popular stock in this table. On the other hand Mueller Industries, Inc. (NYSE:MLI) is the least popular one with only 10 bullish hedge fund positions. Zai Lab Limited (NASDAQ:ZLAB) is not the most popular stock in this group but hedge fund interest is still above average. Our calculations showed that top 15 most popular stocks) among hedge funds returned 24.2% through April 22nd and outperformed the S&P 500 ETF (SPY) by more than 7 percentage points. Hedge funds were also right about betting on ZLAB as the stock returned 26.9% and outperformed the market by an even larger margin. Hedge funds were rewarded for their relative bullishness.