The first quarter was a breeze as Powell pivoted, and China seemed eager to reach a deal with Trump. Both the S&P 500 and Russell 2000 delivered very strong gains as a result, with the Russell 2000, which is composed of smaller companies, outperforming the large-cap stocks slightly during the first quarter. Unfortunately sentiment shifted in May and August as this time China pivoted and Trump put more pressure on China by increasing tariffs. Hedge funds’ top 20 stock picks performed spectacularly in this volatile environment. These stocks delivered a total gain of 24.4% through September 30th, vs. a gain of 20.4% for the S&P 500 ETF. In this article we will look at how this market volatility affected the sentiment of hedge funds towards Zai Lab Limited (NASDAQ:ZLAB), and what that likely means for the prospects of the company and its stock.

Hedge fund interest in Zai Lab Limited (NASDAQ:ZLAB) shares was flat at the end of last quarter. This is usually a negative indicator. The level and the change in hedge fund popularity aren’t the only variables you need to analyze to decipher hedge funds’ perspectives. A stock may witness a boost in popularity but it may still be less popular than similarly priced stocks. That’s why at the end of this article we will examine companies such as TTEC Holdings, Inc. (NASDAQ:TTEC), Patterson Companies, Inc. (NASDAQ:PDCO), and Mack-Cali Realty Corporation (NYSE:CLI) to gather more data points. Our calculations also showed that ZLAB isn’t among the 30 most popular stocks among hedge funds (see the video below).

At Q2’s end, a total of 17 of the hedge funds tracked by Insider Monkey were long this stock, a change of 0% from one quarter earlier. The graph below displays the number of hedge funds with bullish position in ZLAB over the last 16 quarters. With hedge funds’ capital changing hands, there exists an “upper tier” of key hedge fund managers who were upping their stakes meaningfully (or already accumulated large positions). 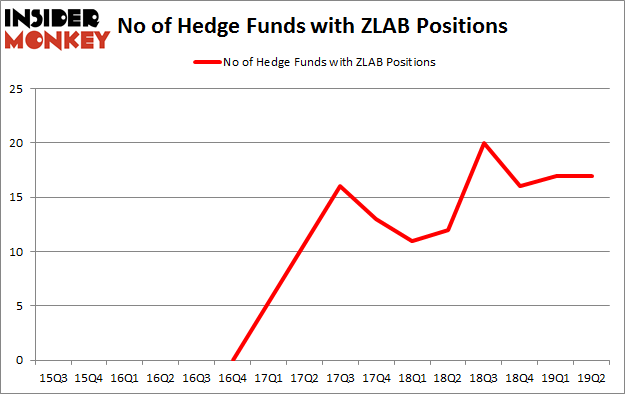 More specifically, Segantii Capital was the largest shareholder of Zai Lab Limited (NASDAQ:ZLAB), with a stake worth $114.7 million reported as of the end of March. Trailing Segantii Capital was OrbiMed Advisors, which amassed a stake valued at $40.8 million. Rock Springs Capital Management, Renaissance Technologies, and Hudson Bay Capital Management were also very fond of the stock, giving the stock large weights in their portfolios.

Since Zai Lab Limited (NASDAQ:ZLAB) has faced bearish sentiment from the entirety of the hedge funds we track, we can see that there was a specific group of fund managers that decided to sell off their entire stakes heading into Q3. It’s worth mentioning that Brian Ashford-Russell and Tim Woolley’s Polar Capital said goodbye to the largest position of the “upper crust” of funds monitored by Insider Monkey, comprising about $5.2 million in stock, and Christopher James’s Partner Fund Management was right behind this move, as the fund said goodbye to about $4.6 million worth. These moves are intriguing to say the least, as aggregate hedge fund interest stayed the same (this is a bearish signal in our experience).

Let’s also examine hedge fund activity in other stocks – not necessarily in the same industry as Zai Lab Limited (NASDAQ:ZLAB) but similarly valued. We will take a look at TTEC Holdings, Inc. (NASDAQ:TTEC), Patterson Companies, Inc. (NASDAQ:PDCO), Mack-Cali Realty Corporation (NYSE:CLI), and Jack in the Box Inc. (NASDAQ:JACK). All of these stocks’ market caps are closest to ZLAB’s market cap.

As you can see these stocks had an average of 21.5 hedge funds with bullish positions and the average amount invested in these stocks was $234 million. That figure was $240 million in ZLAB’s case. Jack in the Box Inc. (NASDAQ:JACK) is the most popular stock in this table. On the other hand Mack Cali Realty Corp (NYSE:CLI) is the least popular one with only 13 bullish hedge fund positions. Zai Lab Limited (NASDAQ:ZLAB) is not the least popular stock in this group but hedge fund interest is still below average. This is a slightly negative signal and we’d rather spend our time researching stocks that hedge funds are piling on. Our calculations showed that top 20 most popular stocks among hedge funds returned 24.4% in 2019 through September 30th and outperformed the S&P 500 ETF (SPY) by 4 percentage points. Unfortunately ZLAB wasn’t nearly as popular as these 20 stocks (hedge fund sentiment was quite bearish); ZLAB investors were disappointed as the stock returned -7.2% during the third quarter and underperformed the market. If you are interested in investing in large cap stocks with huge upside potential, you should check out the top 20 most popular stocks among hedge funds as many of these stocks already outperformed the market so far in 2019.