At Q4’s end, a total of 21 of the hedge funds tracked by Insider Monkey were bullish on this stock, a change of 24% from the second quarter of 2018. By comparison, 16 hedge funds held shares or bullish call options in WING a year ago. With the smart money’s positions undergoing their usual ebb and flow, there exists a select group of noteworthy hedge fund managers who were adding to their holdings meaningfully (or already accumulated large positions). 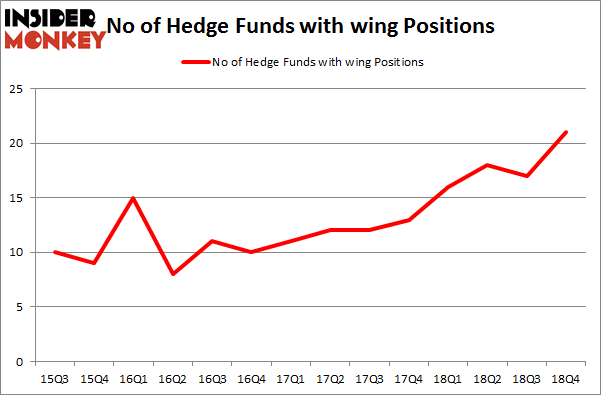 According to publicly available hedge fund and institutional investor holdings data compiled by Insider Monkey, Renaissance Technologies, managed by Jim Simons, holds the biggest position in Wingstop Inc (NASDAQ:WING). Renaissance Technologies has a $44.9 million position in the stock, comprising less than 0.1%% of its 13F portfolio. Sitting at the No. 2 spot is Ken Griffin of Citadel Investment Group, with a $21.3 million position; less than 0.1%% of its 13F portfolio is allocated to the stock. Other peers that hold long positions encompass Richard Driehaus’s Driehaus Capital, Israel Englander’s Millennium Management and Lee Ainslie’s Maverick Capital.

As one would reasonably expect, key money managers have jumped into Wingstop Inc (NASDAQ:WING) headfirst. Citadel Investment Group, managed by Ken Griffin, created the largest position in Wingstop Inc (NASDAQ:WING). Citadel Investment Group had $21.3 million invested in the company at the end of the quarter. Philippe Laffont’s Coatue Management also made a $0.7 million investment in the stock during the quarter. The other funds with brand new WING positions are Peter Algert and Kevin Coldiron’s Algert Coldiron Investors, Minhua Zhang’s Weld Capital Management, and Paul Marshall and Ian Wace’s Marshall Wace LLP.

As you can see these stocks had an average of 17 hedge funds with bullish positions and the average amount invested in these stocks was $220 million. That figure was $129 million in WING’s case. Patterson Companies, Inc. (NASDAQ:PDCO) is the most popular stock in this table. On the other hand Union Bankshares Corporation (NASDAQ:UBSH) is the least popular one with only 6 bullish hedge fund positions. Wingstop Inc (NASDAQ:WING) is not the most popular stock in this group but hedge fund interest is still above average. Our calculations showed that top 15 most popular stocks) among hedge funds returned 24.2% through April 22nd and outperformed the S&P 500 ETF (SPY) by more than 7 percentage points. Hedge funds were also right about betting on WING, though not to the same extent, as the stock returned 20.2% and outperformed the market as well.