Does WESCO International, Inc. (NYSE:WCC) represent a good buying opportunity at the moment? Let’s briefly check the hedge fund interest towards the company. Hedge fund firms constantly search out bright intellectuals and highly-experienced employees and throw away millions of dollars on satellite photos and other research activities, so it is no wonder why they tend to generate millions in profits each year. It is also true that some hedge fund players fail inconceivably on some occasions, but net net their stock picks have been generating superior risk-adjusted returns on average over the years.

Hedge fund interest in WESCO International, Inc. (NYSE:WCC) shares was flat at the end of last quarter. This is usually a negative indicator. The level and the change in hedge fund popularity aren’t the only variables you need to analyze to decipher hedge funds’ perspectives. A stock may witness a boost in popularity but it may still be less popular than similarly priced stocks. That’s why at the end of this article we will examine companies such as Korn Ferry (NYSE:KFY), Eldorado Gold Corp (NYSE:EGO), and Yamana Gold Inc. (NYSE:AUY) to gather more data points.

How have hedgies been trading WESCO International, Inc. (NYSE:WCC)?

At the end of the fourth quarter, a total of 26 of the hedge funds tracked by Insider Monkey were bullish on this stock, a change of 0% from the second quarter of 2018. The graph below displays the number of hedge funds with bullish position in WCC over the last 14 quarters. With hedgies’ sentiment swirling, there exists an “upper tier” of notable hedge fund managers who were adding to their stakes significantly (or already accumulated large positions). 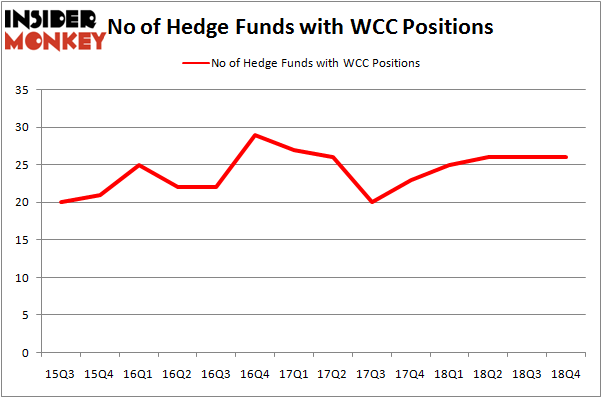 More specifically, Blue Harbour Group was the largest shareholder of WESCO International, Inc. (NYSE:WCC), with a stake worth $176.9 million reported as of the end of September. Trailing Blue Harbour Group was AQR Capital Management, which amassed a stake valued at $56.3 million. Polaris Capital Management, D E Shaw, and GLG Partners were also very fond of the stock, giving the stock large weights in their portfolios.

Because WESCO International, Inc. (NYSE:WCC) has experienced bearish sentiment from hedge fund managers, logic holds that there was a specific group of hedge funds that slashed their entire stakes last quarter. Interestingly, Brian Gustavson and Andrew Haley’s 1060 Capital Management sold off the biggest position of the “upper crust” of funds watched by Insider Monkey, totaling an estimated $8.5 million in stock, and Ken Grossman and Glen Schneider’s SG Capital Management was right behind this move, as the fund sold off about $6.7 million worth. These bearish behaviors are important to note, as total hedge fund interest stayed the same (this is a bearish signal in our experience).

As you can see these stocks had an average of 12.5 hedge funds with bullish positions and the average amount invested in these stocks was $42 million. That figure was $387 million in WCC’s case. Korn Ferry (NYSE:KFY) is the most popular stock in this table. On the other hand NuStar Energy L.P. (NYSE:NS) is the least popular one with only 2 bullish hedge fund positions. Compared to these stocks WESCO International, Inc. (NYSE:WCC) is more popular among hedge funds. Our calculations showed that top 15 most popular stocks) among hedge funds returned 24.2% through April 22nd and outperformed the S&P 500 ETF (SPY) by more than 7 percentage points. Hedge funds were also right about betting on WCC, though not to the same extent, as the stock returned 16.7% and outperformed the market as well.