Hedge funds and large money managers usually invest with a focus on the long-term horizon and, therefore, short-lived dips on the charts, usually don’t make them change their opinion towards a company. This time it may be different. During the fourth quarter of 2018 we observed increased volatility and small-cap stocks underperformed the market. Hedge fund investor letters indicated that they are cutting their overall exposure, closing out some position and doubling down on others. Let’s take a look at the hedge fund sentiment towards Wesco Aircraft Holdings Inc (NYSE:WAIR) to find out whether it was one of their high conviction long-term ideas.

Wesco Aircraft Holdings Inc (NYSE:WAIR) shares haven’t seen a lot of action during the third quarter. Overall, hedge fund sentiment was unchanged. The stock was in 17 hedge funds’ portfolios at the end of the fourth quarter of 2018. At the end of this article we will also compare WAIR to other stocks including 1-800-FLOWERS.COM, Inc. (NASDAQ:FLWS), China Cord Blood Corp (NYSE:CO), and Granite Point Mortgage Trust Inc. (NYSE:GPMT) to get a better sense of its popularity.

Heading into the first quarter of 2019, a total of 17 of the hedge funds tracked by Insider Monkey were bullish on this stock, a change of 0% from one quarter earlier. Below, you can check out the change in hedge fund sentiment towards WAIR over the last 14 quarters. With hedge funds’ positions undergoing their usual ebb and flow, there exists a select group of notable hedge fund managers who were upping their holdings meaningfully (or already accumulated large positions). 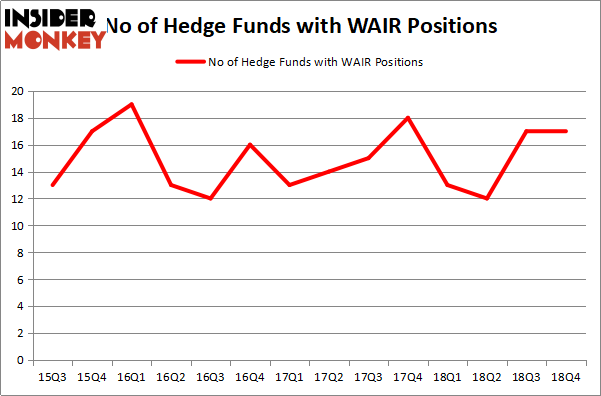 More specifically, Makaira Partners was the largest shareholder of Wesco Aircraft Holdings Inc (NYSE:WAIR), with a stake worth $85.5 million reported as of the end of December. Trailing Makaira Partners was Royce & Associates, which amassed a stake valued at $22.4 million. Cove Street Capital, Wallace R. Weitz & Co., and Pzena Investment Management were also very fond of the stock, giving the stock large weights in their portfolios.

Judging by the fact that Wesco Aircraft Holdings Inc (NYSE:WAIR) has experienced a decline in interest from the smart money, logic holds that there is a sect of hedgies that elected to cut their full holdings heading into Q3. At the top of the heap, Jim Simons’s Renaissance Technologies dropped the largest investment of the “upper crust” of funds watched by Insider Monkey, comprising close to $0.2 million in stock. Michael Platt and William Reeves’s fund, BlueCrest Capital Mgmt., also dropped its stock, about $0.2 million worth. These moves are important to note, as total hedge fund interest stayed the same (this is a bearish signal in our experience).

As you can see these stocks had an average of 11 hedge funds with bullish positions and the average amount invested in these stocks was $58 million. That figure was $172 million in WAIR’s case. Ambac Financial Group, Inc. (NASDAQ:AMBC) is the most popular stock in this table. On the other hand Granite Point Mortgage Trust Inc. (NYSE:GPMT) is the least popular one with only 6 bullish hedge fund positions. Wesco Aircraft Holdings Inc (NYSE:WAIR) is not the most popular stock in this group but hedge fund interest is still above average. This is a slightly positive signal but we’d rather spend our time researching stocks that hedge funds are piling on. Our calculations showed that top 15 most popular stocks) among hedge funds returned 24.2% through April 22nd and outperformed the S&P 500 ETF (SPY) by more than 7 percentage points. Unfortunately WAIR wasn’t nearly as popular as these 15 stock and hedge funds that were betting on WAIR were disappointed as the stock returned 3.5% and underperformed the market. If you are interested in investing in large cap stocks with huge upside potential, you should check out the top 15 most popular stocks) among hedge funds as 13 of these stocks already outperformed the market this year.