We can judge whether WesBanco, Inc. (NASDAQ:WSBC) is a good investment right now by following the lead of some of the best investors in the world and piggybacking their ideas. There’s no better way to get these firms’ immense resources and analytical capabilities working for us than to follow their lead into their best ideas. While not all of these picks will be winners, our research shows that these picks historically outperformed the market when we factor in known risk factors.

Is WesBanco, Inc. (NASDAQ:WSBC) the right pick for your portfolio? The smart money is turning less bullish. The number of long hedge fund positions shrunk by 4 in recent months. Our calculations also showed that WSBC isn’t among the 30 most popular stocks among hedge funds. WSBC was in 5 hedge funds’ portfolios at the end of the fourth quarter of 2018. There were 9 hedge funds in our database with WSBC holdings at the end of the previous quarter.

At the moment there are a large number of metrics stock traders use to evaluate publicly traded companies. A pair of the most under-the-radar metrics are hedge fund and insider trading sentiment. We have shown that, historically, those who follow the top picks of the elite fund managers can beat their index-focused peers by a solid amount (see the details here).

What does the smart money think about WesBanco, Inc. (NASDAQ:WSBC)? 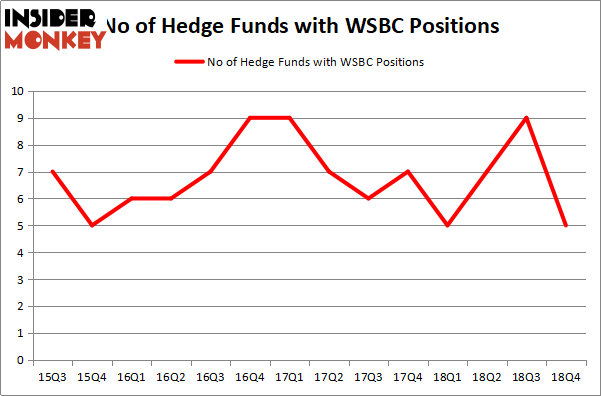 Among these funds, Renaissance Technologies held the most valuable stake in WesBanco, Inc. (NASDAQ:WSBC), which was worth $31 million at the end of the third quarter. On the second spot was Basswood Capital which amassed $5.6 million worth of shares. Moreover, Millennium Management, Citadel Investment Group, and AQR Capital Management were also bullish on WesBanco, Inc. (NASDAQ:WSBC), allocating a large percentage of their portfolios to this stock.

Because WesBanco, Inc. (NASDAQ:WSBC) has witnessed a decline in interest from the smart money, it’s easy to see that there exists a select few funds that decided to sell off their entire stakes heading into Q3. It’s worth mentioning that Martin Whitman’s Third Avenue Management said goodbye to the largest stake of all the hedgies followed by Insider Monkey, worth close to $5 million in call options, and Matthew Hulsizer’s PEAK6 Capital Management was right behind this move, as the fund dumped about $0.5 million worth. These moves are intriguing to say the least, as total hedge fund interest was cut by 4 funds heading into Q3.

As you can see these stocks had an average of 21.75 hedge funds with bullish positions and the average amount invested in these stocks was $224 million. That figure was $42 million in WSBC’s case. Jack in the Box Inc. (NASDAQ:JACK) is the most popular stock in this table. On the other hand EVO Payments, Inc. (NASDAQ:EVOP) is the least popular one with only 10 bullish hedge fund positions. Compared to these stocks WesBanco, Inc. (NASDAQ:WSBC) is even less popular than EVOP. Hedge funds dodged a bullet by taking a bearish stance towards WSBC. Our calculations showed that the top 15 most popular hedge fund stocks returned 24.2% through April 22nd and outperformed the S&P 500 ETF (SPY) by more than 7 percentage points. Unfortunately WSBC wasn’t nearly as popular as these 15 stock (hedge fund sentiment was very bearish); WSBC investors were disappointed as the stock returned 7.5% and underperformed the market. If you are interested in investing in large cap stocks with huge upside potential, you should check out the top 15 most popular stocks) among hedge funds as 13 of these stocks already outperformed the market this year.