Is Weibo Corp (NASDAQ:WB) a bargain? Prominent investors are getting less optimistic. The number of long hedge fund bets decreased by 6 lately. Our calculations also showed that WB isn’t among the 30 most popular stocks among hedge funds. WB was in 17 hedge funds’ portfolios at the end of the fourth quarter of 2018. There were 23 hedge funds in our database with WB holdings at the end of the previous quarter.

If you’d ask most market participants, hedge funds are perceived as underperforming, old financial vehicles of the past. While there are over 8000 funds in operation at the moment, Our researchers look at the leaders of this group, approximately 750 funds. These investment experts control the lion’s share of the hedge fund industry’s total asset base, and by observing their inimitable picks, Insider Monkey has unsheathed numerous investment strategies that have historically surpassed the market. Insider Monkey’s flagship hedge fund strategy beat the S&P 500 index by nearly 5 percentage points annually since its inception in May 2014 through early November 2018. We were able to generate large returns even by identifying short candidates. Our portfolio of short stocks lost 27.5% since February 2017 (through March 12th) even though the market was up nearly 25% during the same period. We just shared a list of 6 short targets in our latest quarterly update and they are already down an average of 6% in less than a month.

What have hedge funds been doing with Weibo Corp (NASDAQ:WB)?

At the end of the fourth quarter, a total of 17 of the hedge funds tracked by Insider Monkey were bullish on this stock, a change of -26% from the previous quarter. Below, you can check out the change in hedge fund sentiment towards WB over the last 14 quarters. With hedge funds’ capital changing hands, there exists a select group of noteworthy hedge fund managers who were upping their stakes significantly (or already accumulated large positions). 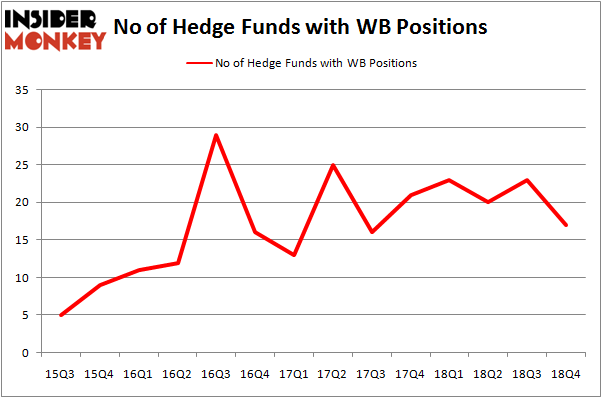 Among these funds, Fisher Asset Management held the most valuable stake in Weibo Corp (NASDAQ:WB), which was worth $161.5 million at the end of the third quarter. On the second spot was Platinum Asset Management which amassed $74.2 million worth of shares. Moreover, Renaissance Technologies, Oaktree Capital Management, and Citadel Investment Group were also bullish on Weibo Corp (NASDAQ:WB), allocating a large percentage of their portfolios to this stock.

Due to the fact that Weibo Corp (NASDAQ:WB) has witnessed declining sentiment from the aggregate hedge fund industry, we can see that there lies a certain “tier” of money managers who were dropping their entire stakes in the third quarter. It’s worth mentioning that John Overdeck and David Siegel’s Two Sigma Advisors said goodbye to the largest position of the “upper crust” of funds monitored by Insider Monkey, worth an estimated $11.3 million in stock, and David Keidan’s Buckingham Capital Management was right behind this move, as the fund cut about $8 million worth. These moves are important to note, as total hedge fund interest was cut by 6 funds in the third quarter.

As you can see these stocks had an average of 35 hedge funds with bullish positions and the average amount invested in these stocks was $804 million. That figure was $349 million in WB’s case. D.R. Horton, Inc. (NYSE:DHI) is the most popular stock in this table. On the other hand Discovery, Inc. (NASDAQ:DISCA) is the least popular one with only 24 bullish hedge fund positions. Compared to these stocks Weibo Corp (NASDAQ:WB) is even less popular than DISCA. Considering that hedge funds aren’t fond of this stock in relation to other companies analyzed in this article, it may be a good idea to analyze it in detail and understand why the smart money isn’t behind this stock. This isn’t necessarily bad news. Although it is possible that hedge funds may think the stock is overpriced and view the stock as a short candidate, they may not be very familiar with the bullish thesis. Our calculations showed that top 15 most popular stocks among hedge funds returned 19.7% through March 15th and outperformed the S&P 500 ETF (SPY) by 6.6 percentage points. Unfortunately WB wasn’t in this group. Hedge funds that bet on WB were disappointed as the stock returned 7.1% and underperformed the market. If you are interested in investing in large cap stocks, you should check out the top 15 hedge fund stocks as 13 of these outperformed the market.

Here’s What Hedge Funds Think About Take-Two Interactive Software, Inc...
Monthly Newsletter Strategy
Download a free copy of our newsletter and see the details inside!
Hedge Fund Resource Center
Related News
Do Hedge Funds Love Weibo Corp (WB)? 33 Recent Stories Telling How The Financial Markets Are Doing Today Is Weibo Corp (ADR) (WB) A Good Stock To Buy? Tiger Pacific’s New Investments in Chinese Stocks, Plus 1 It Sold Off Big Things Are Expected of These Stocks Here’s Why SINA Corp, Microchip Technology, Endo International & Other Stocks Are on the Move Today Why Are These Stocks Surging Today? 15 Most Physically Demanding Olympic Sports Hedge Funds Have Never Been This Bullish On Visa Inc (V) Ten of the Most Common Addictions
Billionaire Hedge Funds