Is Weatherford International plc (NYSE:WFT) ready to rally soon? Investors who are in the know are turning bullish. The number of bullish hedge fund bets advanced by 1 in recent months. Our calculations also showed that wft isn’t among the 30 most popular stocks among hedge funds. WFT was in 22 hedge funds’ portfolios at the end of December. There were 21 hedge funds in our database with WFT positions at the end of the previous quarter.

What have hedge funds been doing with Weatherford International plc (NYSE:WFT)?

At Q4’s end, a total of 22 of the hedge funds tracked by Insider Monkey were bullish on this stock, a change of 5% from the previous quarter. Below, you can check out the change in hedge fund sentiment towards WFT over the last 14 quarters. With the smart money’s positions undergoing their usual ebb and flow, there exists an “upper tier” of noteworthy hedge fund managers who were increasing their stakes substantially (or already accumulated large positions). 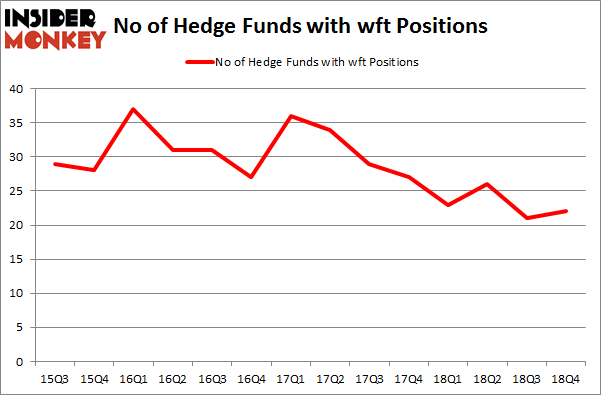 More specifically, Perella Weinberg Partners was the largest shareholder of Weatherford International plc (NYSE:WFT), with a stake worth $19.3 million reported as of the end of December. Trailing Perella Weinberg Partners was Nokota Management, which amassed a stake valued at $18.8 million. Prescott Group Capital Management, Citadel Investment Group, and Q Investments (Specter Holdings) were also very fond of the stock, giving the stock large weights in their portfolios.