The market has been volatile in the fourth quarter as the Federal Reserve continued its rate hikes to normalize the interest rates. Small cap stocks have been hit hard as a result, as the Russell 2000 ETF (IWM) has underperformed the larger S&P 500 ETF (SPY) by nearly 7 percentage points. SEC filings and hedge fund investor letters indicate that the smart money seems to be paring back their overall long exposure since summer months, and the funds’ movements is one of the reasons why the major indexes have retraced. In this article, we analyze what the smart money thinks of Waitr Holdings Inc. (NASDAQ:WTRH) and find out how it is affected by hedge funds’ moves.

Is Waitr Holdings Inc. (NASDAQ:WTRH) a buy, sell, or hold? Investors who are in the know are in a pessimistic mood. The number of long hedge fund positions were cut by 2 recently. Our calculations also showed that wtrh isn’t among the 30 most popular stocks among hedge funds.

How have hedgies been trading Waitr Holdings Inc. (NASDAQ:WTRH)?

At the end of the fourth quarter, a total of 18 of the hedge funds tracked by Insider Monkey held long positions in this stock, a change of -10% from the previous quarter. By comparison, 13 hedge funds held shares or bullish call options in WTRH a year ago. With the smart money’s sentiment swirling, there exists a select group of noteworthy hedge fund managers who were upping their stakes significantly (or already accumulated large positions). 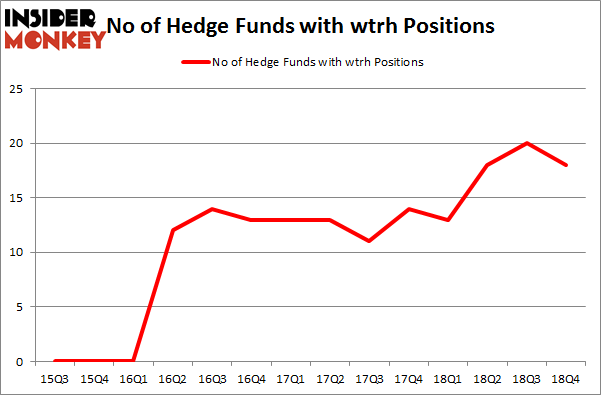 More specifically, Leucadia National was the largest shareholder of Waitr Holdings Inc. (NASDAQ:WTRH), with a stake worth $43.4 million reported as of the end of December. Trailing Leucadia National was Pelham Capital, which amassed a stake valued at $39.6 million. Park West Asset Management, ThornTree Capital Partners, and Corvex Capital were also very fond of the stock, giving the stock large weights in their portfolios.

We view hedge fund activity in the stock unfavorable, but in this case there was only a single hedge fund selling its entire position: 999. One hedge fund selling its entire position doesn’t always imply a bearish intent. Theoretically a hedge fund may decide to sell a promising position in order to invest the proceeds in a more promising idea. However, we don’t think this is the case in this case because only one of the 800+ hedge funds tracked by Insider Monkey identified as a viable investment and initiated a position in the stock (that fund was Leucadia National).