A whopping number of 13F filings filed with U.S. Securities and Exchange Commission has been processed by Insider Monkey so that individual investors can look at the overall hedge fund sentiment towards the stocks included in their watchlists. These freshly-submitted public filings disclose money managers’ equity positions as of the end of the three-month period that ended December 31, so let’s proceed with the discussion of the hedge fund sentiment on W.R. Grace & Co. (NYSE:GRA).

Hedge fund interest in W.R. Grace & Co. (NYSE:GRA) shares was flat at the end of last quarter. This is usually a negative indicator. At the end of this article we will also compare GRA to other stocks including Life Storage, Inc. (NYSE:LSI), Oshkosh Corporation (NYSE:OSK), and Axis Capital Holdings Limited (NYSE:AXS) to get a better sense of its popularity. 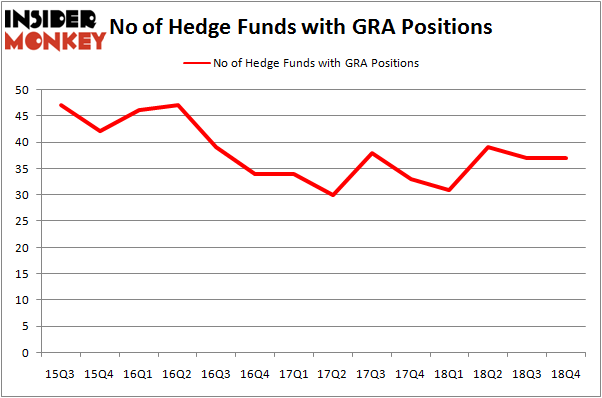 The largest stake in W.R. Grace & Co. (NYSE:GRA) was held by 40 North Management, which reported holding $606.6 million worth of stock at the end of September. It was followed by Soroban Capital Partners with a $207.7 million position. Other investors bullish on the company included Iridian Asset Management, Echo Street Capital Management, and Highline Capital Management.

Judging by the fact that W.R. Grace & Co. (NYSE:GRA) has faced falling interest from the smart money, it’s safe to say that there was a specific group of fund managers that decided to sell off their entire stakes last quarter. Intriguingly, Phill Gross and Robert Atchinson’s Adage Capital Management cut the largest position of the 700 funds followed by Insider Monkey, totaling about $41.8 million in stock. Nick Niell’s fund, Arrowgrass Capital Partners, also said goodbye to its stock, about $21.7 million worth. These transactions are important to note, as total hedge fund interest stayed the same (this is a bearish signal in our experience).

As you can see these stocks had an average of 21.75 hedge funds with bullish positions and the average amount invested in these stocks was $378 million. That figure was $1688 million in GRA’s case. Axis Capital Holdings Limited (NYSE:AXS) is the most popular stock in this table. On the other hand Life Storage, Inc. (NYSE:LSI) is the least popular one with only 13 bullish hedge fund positions. Compared to these stocks W.R. Grace & Co. (NYSE:GRA) is more popular among hedge funds. Our calculations showed that top 15 most popular stocks) among hedge funds returned 24.2% through April 22nd and outperformed the S&P 500 ETF (SPY) by more than 7 percentage points. Hedge funds were also right about betting on GRA, though not to the same extent, as the stock returned 18.5% and outperformed the market as well.