A whopping number of 13F filings filed with U.S. Securities and Exchange Commission has been processed by Insider Monkey so that individual investors can look at the overall hedge fund sentiment towards the stocks included in their watchlists. These freshly-submitted public filings disclose money managers’ equity positions as of the end of the three-month period that ended December 31, so let’s proceed with the discussion of the hedge fund sentiment on W.P. Carey Inc. REIT (NYSE:WPC).

W.P. Carey Inc. (NYSE:WPC) shares haven’t seen a lot of action during the third quarter. Overall, hedge fund sentiment was unchanged. The stock was in 10 hedge funds’ portfolios at the end of December. At the end of this article we will also compare WPC to other stocks including Invitation Homes Inc. (NYSE:INVH), InterContinental Hotels Group PLC (NYSE:IHG), and Enel Americas S.A. (NYSE:ENIA) to get a better sense of its popularity.

What have hedge funds been doing with W.P. Carey Inc. (NYSE:WPC)?

Heading into the first quarter of 2019, a total of 10 of the hedge funds tracked by Insider Monkey were bullish on this stock, a change of 0% from the second quarter of 2018. On the other hand, there were a total of 12 hedge funds with a bullish position in WPC a year ago. With the smart money’s sentiment swirling, there exists an “upper tier” of noteworthy hedge fund managers who were adding to their holdings meaningfully (or already accumulated large positions). 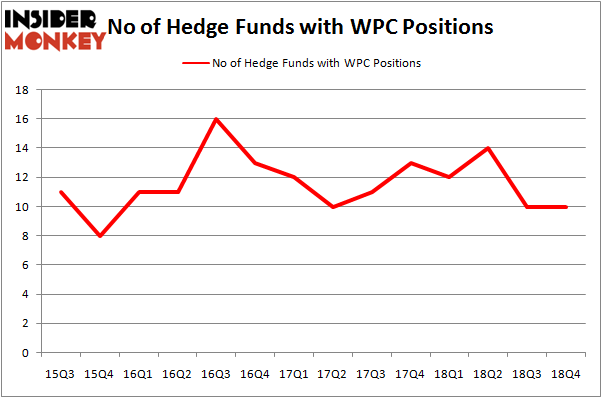 Among these funds, Two Sigma Advisors held the most valuable stake in W.P. Carey Inc. (NYSE:WPC), which was worth $24.1 million at the end of the third quarter. On the second spot was Citadel Investment Group which amassed $13.4 million worth of shares. Moreover, Renaissance Technologies, PEAK6 Capital Management, and AQR Capital Management were also bullish on W.P. Carey Inc. (NYSE:WPC), allocating a large percentage of their portfolios to this stock.

Because W.P. Carey Inc. (NYSE:WPC) has witnessed declining sentiment from the aggregate hedge fund industry, logic holds that there lies a certain “tier” of hedge funds who sold off their full holdings last quarter. Interestingly, Israel Englander’s Millennium Management cut the biggest position of all the hedgies watched by Insider Monkey, totaling about $1.2 million in stock. Dmitry Balyasny’s fund, Balyasny Asset Management, also dropped its stock, about $0.8 million worth. These bearish behaviors are intriguing to say the least, as total hedge fund interest stayed the same (this is a bearish signal in our experience).

As you can see these stocks had an average of 15.75 hedge funds with bullish positions and the average amount invested in these stocks was $223 million. That figure was $49 million in WPC’s case. Dover Corporation (NYSE:DOV) is the most popular stock in this table. On the other hand InterContinental Hotels Group PLC (NYSE:IHG) is the least popular one with only 7 bullish hedge fund positions. W.P. Carey Inc. (NYSE:WPC) is not the least popular stock in this group but hedge fund interest is still below average. This is a slightly negative signal and we’d rather spend our time researching stocks that hedge funds are piling on. Our calculations showed that top 15 most popular stocks among hedge funds returned 19.7% through March 15th and outperformed the S&P 500 ETF (SPY) by 6.6 percentage points. Hedge funds were also right about betting on WPC, though not to the same extent, as the stock returned 18% and outperformed the market as well.