Is Vulcan Materials Company (NYSE:VMC) a bargain? Money managers are buying. The number of bullish hedge fund bets went up by 6 lately. Our calculations also showed that VMC isn’t among the 30 most popular stocks among hedge funds.

How have hedgies been trading Vulcan Materials Company (NYSE:VMC)? 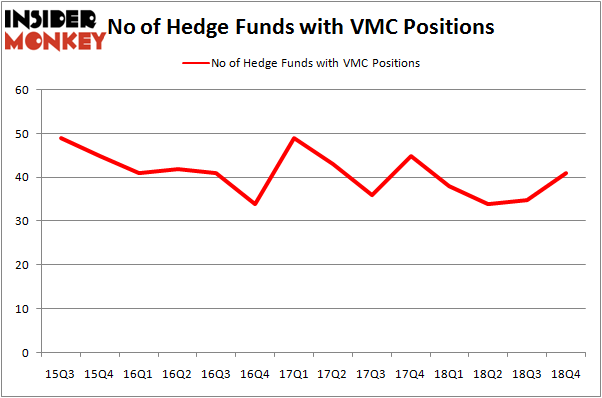 Among these funds, Egerton Capital Limited held the most valuable stake in Vulcan Materials Company (NYSE:VMC), which was worth $288 million at the end of the third quarter. On the second spot was Eminence Capital which amassed $201 million worth of shares. Moreover, Citadel Investment Group, Soroban Capital Partners, and Adage Capital Management were also bullish on Vulcan Materials Company (NYSE:VMC), allocating a large percentage of their portfolios to this stock.

With a general bullishness amongst the heavyweights, key hedge funds have been driving this bullishness. Egerton Capital Limited, managed by John Armitage, initiated the most valuable position in Vulcan Materials Company (NYSE:VMC). Egerton Capital Limited had $288 million invested in the company at the end of the quarter. Brandon Haley’s Holocene Advisors also initiated a $57.6 million position during the quarter. The other funds with new positions in the stock are Daniel Sundheim’s D1 Capital Partners, Anand Parekh’s Alyeska Investment Group, and Stephen J. Errico’s Locust Wood Capital Advisers.

As you can see these stocks had an average of 21.5 hedge funds with bullish positions and the average amount invested in these stocks was $382 million. That figure was $1535 million in VMC’s case. MSCI Inc (NYSE:MSCI) is the most popular stock in this table. On the other hand Magellan Midstream Partners, L.P. (NYSE:MMP) is the least popular one with only 12 bullish hedge fund positions. Compared to these stocks Vulcan Materials Company (NYSE:VMC) is more popular among hedge funds. Considering that hedge funds are fond of this stock in relation to its market cap peers, it may be a good idea to analyze it in detail and potentially include it in your portfolio. Our calculations showed that top 15 most popular stocks among hedge funds returned 19.7% through March 15th and outperformed the S&P 500 ETF (SPY) by 6.6 percentage points. Hedge funds were also right about betting on VMC, though not to the same extent, as the stock returned 14.3% and outperformed the market as well.