The government requires hedge funds and wealthy investors that crossed the $100 million equity holdings threshold are required to file a report that shows their positions at the end of every quarter. Even though it isn’t the intention, these filings level the playing field for ordinary investors. The latest round of 13F filings disclosed the funds’ positions on December 31. We at Insider Monkey have made an extensive database of nearly 750 of those elite funds and prominent investors’ filings. In this article, we analyze how these elite funds and prominent investors traded Vonage Holdings Corp. (NYSE:VG) based on those filings.

Vonage Holdings Corp. (NYSE:VG) was in 22 hedge funds’ portfolios at the end of December. VG investors should pay attention to a decrease in hedge fund sentiment in recent months. There were 26 hedge funds in our database with VG holdings at the end of the previous quarter. Our calculations also showed that vg isn’t among the 30 most popular stocks among hedge funds.

At the end of the fourth quarter, a total of 22 of the hedge funds tracked by Insider Monkey were bullish on this stock, a change of -15% from the second quarter of 2018. On the other hand, there were a total of 23 hedge funds with a bullish position in VG a year ago. With hedge funds’ positions undergoing their usual ebb and flow, there exists a few noteworthy hedge fund managers who were adding to their holdings considerably (or already accumulated large positions). 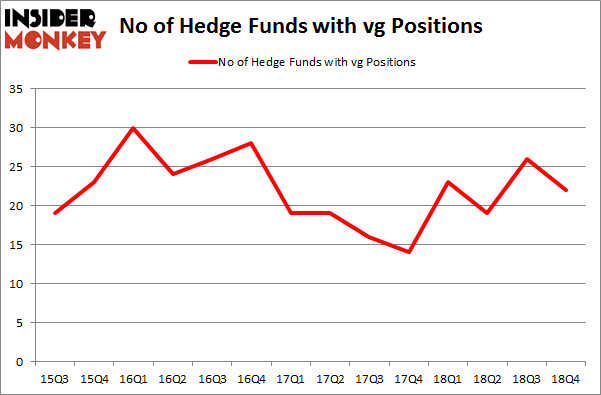 Among these funds, Legion Partners Asset Management held the most valuable stake in Vonage Holdings Corp. (NYSE:VG), which was worth $32.4 million at the end of the fourth quarter. On the second spot was Southpoint Capital Advisors which amassed $30.7 million worth of shares. Moreover, Marshall Wace LLP, Renaissance Technologies, and Millennium Management were also bullish on Vonage Holdings Corp. (NYSE:VG), allocating a large percentage of their portfolios to this stock.

Seeing as Vonage Holdings Corp. (NYSE:VG) has experienced a decline in interest from the entirety of the hedge funds we track, it’s easy to see that there was a specific group of money managers that decided to sell off their full holdings last quarter. At the top of the heap, Charles Frumberg’s Emancipation Capital dropped the largest investment of all the hedgies monitored by Insider Monkey, worth close to $1.6 million in stock. Alec Litowitz and Ross Laser’s fund, Magnetar Capital, also dropped its stock, about $0.8 million worth. These moves are important to note, as aggregate hedge fund interest was cut by 4 funds last quarter.