The fourth quarter was a rough one for most investors, as fears of a rising interest rate environment in the U.S, a trade war with China, and a more or less stagnant Europe, weighed heavily on the minds of investors. Both the S&P 500 and Russell 2000 sank as a result, with the Russell 2000, which is composed of smaller companies, being hit especially hard. This was primarily due to hedge funds, which are big supporters of small-cap stocks, pulling some of their capital out of the volatile markets during this time. Let’s look at how this market volatility affected the sentiment of hedge funds towards Virtusa Corporation (NASDAQ:VRTU), and what that likely means for the prospects of the company and its stock.

Virtusa Corporation (NASDAQ:VRTU) was in 14 hedge funds’ portfolios at the end of December. VRTU has experienced a decrease in hedge fund sentiment in recent months. There were 16 hedge funds in our database with VRTU positions at the end of the previous quarter. Our calculations also showed that VRTU isn’t among the 30 most popular stocks among hedge funds.

What does the smart money think about Virtusa Corporation (NASDAQ:VRTU)?

At Q4’s end, a total of 14 of the hedge funds tracked by Insider Monkey were bullish on this stock, a change of -13% from the previous quarter. Below, you can check out the change in hedge fund sentiment towards VRTU over the last 14 quarters. With hedge funds’ capital changing hands, there exists a few key hedge fund managers who were upping their stakes significantly (or already accumulated large positions). 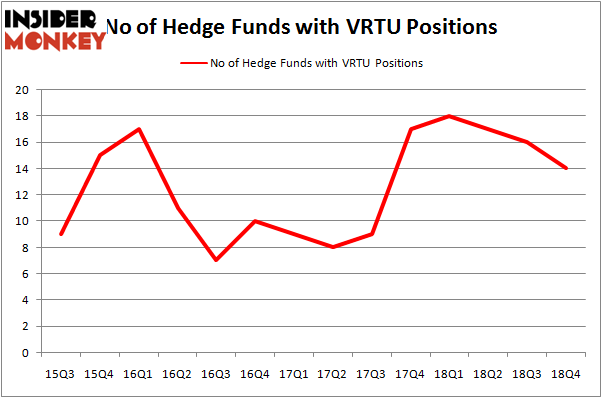 Among these funds, Renaissance Technologies held the most valuable stake in Virtusa Corporation (NASDAQ:VRTU), which was worth $19.7 million at the end of the fourth quarter. On the second spot was Portolan Capital Management which amassed $10.3 million worth of shares. Moreover, Driehaus Capital, Marshall Wace LLP, and P.A.W. CAPITAL PARTNERS were also bullish on Virtusa Corporation (NASDAQ:VRTU), allocating a large percentage of their portfolios to this stock.

Since Virtusa Corporation (NASDAQ:VRTU) has experienced bearish sentiment from the aggregate hedge fund industry, it’s safe to say that there was a specific group of hedge funds who sold off their entire stakes last quarter. It’s worth mentioning that Charles Clough’s Clough Capital Partners said goodbye to the biggest investment of the 700 funds followed by Insider Monkey, totaling close to $4.3 million in stock. Peter Rathjens, Bruce Clarke and John Campbell’s fund, Arrowstreet Capital, also said goodbye to its stock, about $2.4 million worth. These bearish behaviors are interesting, as total hedge fund interest fell by 2 funds last quarter.

Let’s go over hedge fund activity in other stocks – not necessarily in the same industry as Virtusa Corporation (NASDAQ:VRTU) but similarly valued. We will take a look at Warrior Met Coal, Inc. (NYSE:HCC), The Liberty Braves Group (NASDAQ:BATRA), Tri Continental Corporation (NYSE:TY), and Hub Group Inc (NASDAQ:HUBG). This group of stocks’ market valuations are similar to VRTU’s market valuation.

As you can see these stocks had an average of 17 hedge funds with bullish positions and the average amount invested in these stocks was $190 million. That figure was $58 million in VRTU’s case. Warrior Met Coal, Inc. (NYSE:HCC) is the most popular stock in this table. On the other hand Tri Continental Corporation (NYSE:TY) is the least popular one with only 4 bullish hedge fund positions. Virtusa Corporation (NASDAQ:VRTU) is not the least popular stock in this group but hedge fund interest is still below average. Our calculations showed that top 15 most popular stocks) among hedge funds returned 24.2% through April 22nd and outperformed the S&P 500 ETF (SPY) by more than 7 percentage points. A small number of hedge funds were also right about betting on VRTU, though not to the same extent, as the stock returned 23.9% and outperformed the market as well.