Although the masses and most of the financial media blame hedge funds for their exorbitant fee structure and disappointing performance, these investors have proved to have great stock picking abilities over the years (that’s why their assets under management continue to swell). We believe hedge fund sentiment should serve as a crucial tool of an individual investor’s stock selection process, as it may offer great insights of how the brightest minds of the finance industry feel about specific stocks. After all, these people have access to smartest analysts and expensive data/information sources that individual investors can’t match. So should one consider investing in Valmont Industries, Inc. (NYSE:VMI)? The smart money sentiment can provide an answer to this question.

Valmont Industries, Inc. (NYSE:VMI) investors should be aware of an increase in support from the world’s most elite money managers recently. VMI was in 25 hedge funds’ portfolios at the end of the second quarter of 2019. There were 19 hedge funds in our database with VMI positions at the end of the previous quarter. Our calculations also showed that VMI isn’t among the 30 most popular stocks among hedge funds (see the video below).

Heading into the third quarter of 2019, a total of 25 of the hedge funds tracked by Insider Monkey held long positions in this stock, a change of 32% from one quarter earlier. The graph below displays the number of hedge funds with bullish position in VMI over the last 16 quarters. With hedge funds’ capital changing hands, there exists a few notable hedge fund managers who were adding to their stakes meaningfully (or already accumulated large positions). 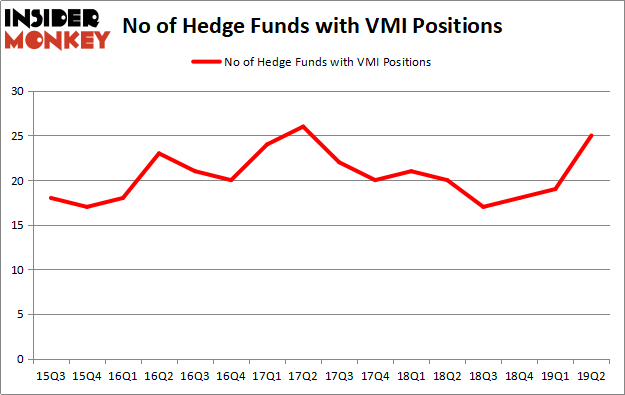 Among these funds, Impax Asset Management held the most valuable stake in Valmont Industries, Inc. (NYSE:VMI), which was worth $112.3 million at the end of the second quarter. On the second spot was Royce & Associates which amassed $53.3 million worth of shares. Moreover, Nitorum Capital, D E Shaw, and Citadel Investment Group were also bullish on Valmont Industries, Inc. (NYSE:VMI), allocating a large percentage of their portfolios to this stock.

With a general bullishness amongst the heavyweights, specific money managers have been driving this bullishness. Balyasny Asset Management, managed by Dmitry Balyasny, assembled the biggest position in Valmont Industries, Inc. (NYSE:VMI). Balyasny Asset Management had $4.9 million invested in the company at the end of the quarter. Matthew Tewksbury’s Stevens Capital Management also initiated a $2.2 million position during the quarter. The other funds with new positions in the stock are Curtis Schenker and Craig Effron’s Scoggin, Paul Marshall and Ian Wace’s Marshall Wace LLP, and Michael Gelband’s ExodusPoint Capital.

As you can see these stocks had an average of 15 hedge funds with bullish positions and the average amount invested in these stocks was $108 million. That figure was $295 million in VMI’s case. Cabot Corporation (NYSE:CBT) is the most popular stock in this table. On the other hand TopBuild Corp (NYSE:BLD) is the least popular one with only 14 bullish hedge fund positions. Compared to these stocks Valmont Industries, Inc. (NYSE:VMI) is more popular among hedge funds. Our calculations showed that top 20 most popular stocks among hedge funds returned 24.4% in 2019 through September 30th and outperformed the S&P 500 ETF (SPY) by 4 percentage points. Hedge funds were also right about betting on VMI as the stock returned 9.5% during Q3 and outperformed the market by an even larger margin. Hedge funds were clearly right about piling into this stock relative to other stocks with similar market capitalizations.