We can judge whether Valhi, Inc. (NYSE:VHI) is a good investment right now by following the lead of some of the best investors in the world and piggybacking their ideas. There’s no better way to get these firms’ immense resources and analytical capabilities working for us than to follow their lead into their best ideas. While not all of these picks will be winners, our research shows that these picks historically outperformed the market when we factor in known risk factors.

Valhi, Inc. (NYSE:VHI) has seen a decrease in enthusiasm from smart money recently. VHI was in 9 hedge funds’ portfolios at the end of December. There were 10 hedge funds in our database with VHI holdings at the end of the previous quarter. Our calculations also showed that VHI isn’t among the 30 most popular stocks among hedge funds.

We’re going to take a gander at the key hedge fund action regarding Valhi, Inc. (NYSE:VHI). 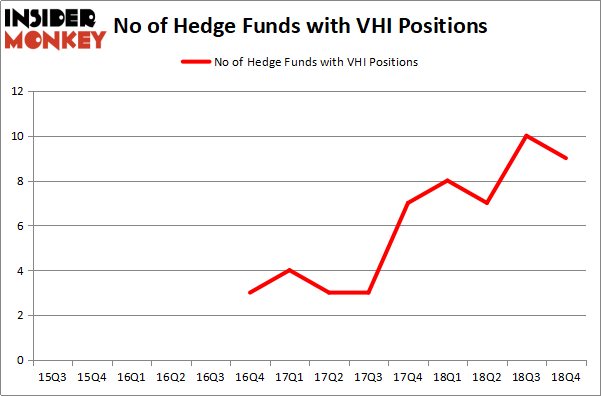 According to Insider Monkey’s hedge fund database, Jim Simons’s Renaissance Technologies has the number one position in Valhi, Inc. (NYSE:VHI), worth close to $2.9 million, amounting to less than 0.1%% of its total 13F portfolio. The second largest stake is held by Zebra Capital Management, managed by Roger Ibbotson, which holds a $0.4 million position; the fund has 0.3% of its 13F portfolio invested in the stock. Other peers that hold long positions encompass Peter Rathjens, Bruce Clarke and John Campbell’s Arrowstreet Capital, Cliff Asness’s AQR Capital Management and Paul Marshall and Ian Wace’s Marshall Wace LLP.

Judging by the fact that Valhi, Inc. (NYSE:VHI) has faced falling interest from the smart money, logic holds that there was a specific group of funds that decided to sell off their full holdings by the end of the third quarter. Interestingly, Daniel S. Och’s OZ Management sold off the biggest investment of the “upper crust” of funds watched by Insider Monkey, totaling an estimated $0.1 million in stock, and Ken Griffin’s Citadel Investment Group was right behind this move, as the fund sold off about $0 million worth. These moves are important to note, as total hedge fund interest was cut by 1 funds by the end of the third quarter.

Let’s go over hedge fund activity in other stocks – not necessarily in the same industry as Valhi, Inc. (NYSE:VHI) but similarly valued. These stocks are Vista Outdoor Inc (NYSE:VSTO), Principia Biopharma Inc. (NASDAQ:PRNB), Cohu, Inc. (NASDAQ:COHU), and Rudolph Technologies Inc (NYSE:RTEC). All of these stocks’ market caps are similar to VHI’s market cap.

As you can see these stocks had an average of 12.25 hedge funds with bullish positions and the average amount invested in these stocks was $95 million. That figure was $4 million in VHI’s case. Vista Outdoor Inc (NYSE:VSTO) is the most popular stock in this table. On the other hand Cohu, Inc. (NASDAQ:COHU) is the least popular one with only 9 bullish hedge fund positions. Compared to these stocks Valhi, Inc. (NYSE:VHI) is even less popular than COHU. Hedge funds clearly dropped the ball on VHI as the stock delivered strong returns, though hedge funds’ consensus picks still generated respectable returns. Our calculations showed that top 15 most popular stocks) among hedge funds returned 24.2% through April 22nd and outperformed the S&P 500 ETF (SPY) by more than 7 percentage points. A small number of hedge funds were also right about betting on VHI as the stock returned 31.2% and outperformed the market by an even larger margin.