US Foods Holding Corp. (NYSE:USFD) has seen a decrease in activity from the world’s largest hedge funds lately. USFD was in 40 hedge funds’ portfolios at the end of the first quarter of 2019. There were 41 hedge funds in our database with USFD positions at the end of the previous quarter. Our calculations also showed that usfd isn’t among the 30 most popular stocks among hedge funds.

How are hedge funds trading US Foods Holding Corp. (NYSE:USFD)? 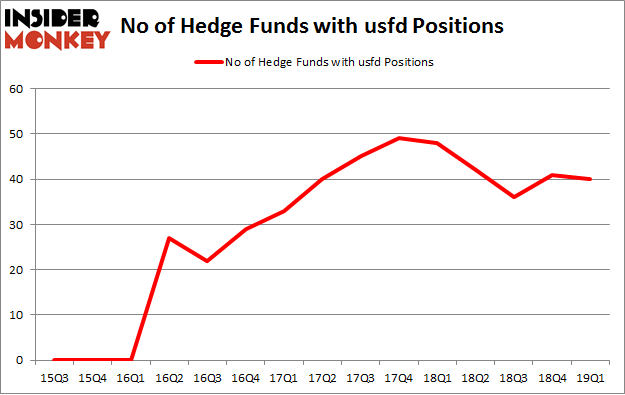 The largest stake in US Foods Holding Corp. (NYSE:USFD) was held by Eminence Capital, which reported holding $217.3 million worth of stock at the end of March. It was followed by Sachem Head Capital with a $150.1 million position. Other investors bullish on the company included Holocene Advisors, Maverick Capital, and Palestra Capital Management.

Due to the fact that US Foods Holding Corp. (NYSE:USFD) has faced falling interest from the aggregate hedge fund industry, logic holds that there is a sect of hedgies that decided to sell off their entire stakes last quarter. Interestingly, Clint Carlson’s Carlson Capital sold off the biggest stake of all the hedgies followed by Insider Monkey, totaling about $40.7 million in stock. Gregory Thomas’s fund, Carbonado Capital, also said goodbye to its stock, about $16.9 million worth. These moves are intriguing to say the least, as aggregate hedge fund interest dropped by 1 funds last quarter.

As you can see these stocks had an average of 20.25 hedge funds with bullish positions and the average amount invested in these stocks was $299 million. That figure was $1341 million in USFD’s case. L Brands Inc (NYSE:LB) is the most popular stock in this table. On the other hand Nordson Corporation (NASDAQ:NDSN) is the least popular one with only 13 bullish hedge fund positions. Compared to these stocks US Foods Holding Corp. (NYSE:USFD) is more popular among hedge funds. Our calculations showed that top 20 most popular stocks among hedge funds returned 1.9% in Q2 through May 30th and outperformed the S&P 500 ETF (SPY) by more than 3 percentage points. Hedge funds were also right about betting on USFD as the stock returned 2.7% during the same period and outperformed the market by an even larger margin. Hedge funds were clearly right about piling into this stock relative to other stocks with similar market capitalizations.