Like everyone else, elite investors make mistakes. Some of their top consensus picks, such as Amazon, Facebook and Alibaba, have not done well in Q4 due to various reasons. Nevertheless, the data show elite investors’ consensus picks have done well on average over the long-term. The top 20 stocks among hedge funds beat the S&P 500 Index ETF by 4 percentage points so far this year. Because their consensus picks have done well, we pay attention to what elite funds think before doing extensive research on a stock. In this article, we take a closer look at Urstadt Biddle Properties Inc (NYSE:UBA) from the perspective of those elite funds.

Hedge fund interest in Urstadt Biddle Properties Inc (NYSE:UBA) shares was flat at the end of last quarter. This is usually a negative indicator. At the end of this article we will also compare UBA to other stocks including The Gorman-Rupp Company (NYSEAMEX:GRC), Tidewater Inc. (NYSE:TDW), and Everi Holdings Inc (NYSE:EVRI) to get a better sense of its popularity. Our calculations also showed that UBA isn’t among the 30 most popular stocks among hedge funds (see the video below).

At Q2’s end, a total of 8 of the hedge funds tracked by Insider Monkey were bullish on this stock, a change of 0% from one quarter earlier. On the other hand, there were a total of 9 hedge funds with a bullish position in UBA a year ago. With the smart money’s sentiment swirling, there exists an “upper tier” of notable hedge fund managers who were upping their holdings meaningfully (or already accumulated large positions). 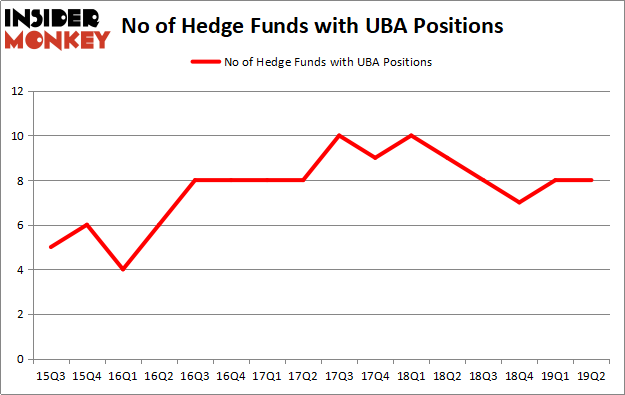 Among these funds, Renaissance Technologies held the most valuable stake in Urstadt Biddle Properties Inc (NYSE:UBA), which was worth $24.7 million at the end of the second quarter. On the second spot was AQR Capital Management which amassed $2 million worth of shares. Moreover, Two Sigma Advisors, Millennium Management, and Winton Capital Management were also bullish on Urstadt Biddle Properties Inc (NYSE:UBA), allocating a large percentage of their portfolios to this stock.

Because Urstadt Biddle Properties Inc (NYSE:UBA) has faced falling interest from the aggregate hedge fund industry, it’s safe to say that there exists a select few fund managers who were dropping their positions entirely by the end of the second quarter. It’s worth mentioning that Paul Marshall and Ian Wace’s Marshall Wace LLP dropped the biggest stake of the 750 funds tracked by Insider Monkey, comprising about $0.2 million in stock, and Gavin Saitowitz and Cisco J. del Valle’s Springbok Capital was right behind this move, as the fund dropped about $0 million worth. These moves are interesting, as aggregate hedge fund interest stayed the same (this is a bearish signal in our experience).

As you can see these stocks had an average of 14.5 hedge funds with bullish positions and the average amount invested in these stocks was $162 million. That figure was $30 million in UBA’s case. Everi Holdings Inc (NYSE:EVRI) is the most popular stock in this table. On the other hand The Gorman-Rupp Company (NYSEAMEX:GRC) is the least popular one with only 7 bullish hedge fund positions. Urstadt Biddle Properties Inc (NYSE:UBA) is not the least popular stock in this group but hedge fund interest is still below average. Our calculations showed that top 20 most popular stocks among hedge funds returned 24.4% in 2019 through September 30th and outperformed the S&P 500 ETF (SPY) by 4 percentage points. A small number of hedge funds were also right about betting on UBA as the stock returned 14.3% during the same time frame and outperformed the market by an even larger margin.