“Market conditions are changing. The continued rise in interest rates suggests we are in the early stages of a bond bear market, which could intensify as central banks withdraw liquidity. The receding tide of liquidity will start to reveal more rocks beyond what has been exposed in emerging markets so far, and the value of a value discipline will be in avoiding the biggest capital-destroying rocks. If a rock emerges on the crowded shore of U.S. momentum, it could result in a major liquidity challenge, as momentum is often most intense on the downside as a crowded trade reverses. So investors are facing a large potential trade-off right now: continue to bet on the current dominance of momentum and the S&P 500, or bet on change and take an active value bet in names with attractive value and optionality, but with negative momentum,” said Clearbridge Investments in its market commentary. We aren’t sure whether long-term interest rates will top 5% and value stocks outperform growth, but we follow hedge fund investor letters to understand where the markets and stocks might be going. This article will lay out and discuss the hedge fund and institutional investor sentiment towards Universal Logistics Holdings, Inc. (NASDAQ:ULH).

Universal Logistics Holdings, Inc. (NASDAQ:ULH) was in 11 hedge funds’ portfolios at the end of December. ULH shareholders have witnessed a decrease in hedge fund sentiment in recent months. There were 12 hedge funds in our database with ULH positions at the end of the previous quarter. Our calculations also showed that ulh isn’t among the 30 most popular stocks among hedge funds.

What have hedge funds been doing with Universal Logistics Holdings, Inc. (NASDAQ:ULH)?

Heading into the first quarter of 2019, a total of 11 of the hedge funds tracked by Insider Monkey held long positions in this stock, a change of -8% from the second quarter of 2018. Below, you can check out the change in hedge fund sentiment towards ULH over the last 14 quarters. With the smart money’s positions undergoing their usual ebb and flow, there exists a few notable hedge fund managers who were increasing their holdings meaningfully (or already accumulated large positions). 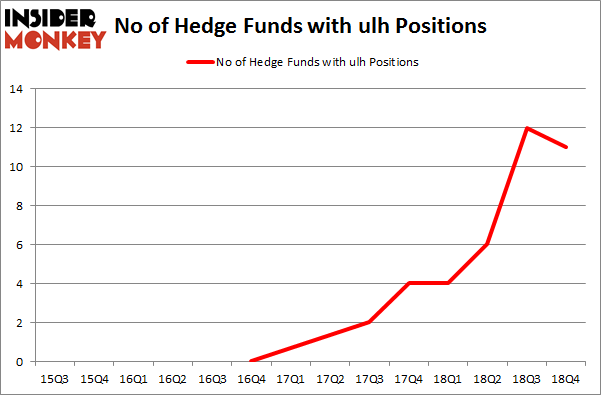 Of the funds tracked by Insider Monkey, Royce & Associates, managed by Chuck Royce, holds the most valuable position in Universal Logistics Holdings, Inc. (NASDAQ:ULH). Royce & Associates has a $11.5 million position in the stock, comprising 0.1% of its 13F portfolio. The second most bullish fund manager is Renaissance Technologies, led by Jim Simons, holding a $6 million position; less than 0.1%% of its 13F portfolio is allocated to the stock. Some other professional money managers that are bullish include Cliff Asness’s AQR Capital Management, Peter Rathjens, Bruce Clarke and John Campbell’s Arrowstreet Capital and D. E. Shaw’s D E Shaw.

Seeing as Universal Logistics Holdings, Inc. (NASDAQ:ULH) has experienced falling interest from the smart money, logic holds that there were a few money managers that elected to cut their entire stakes in the third quarter. Intriguingly, Richard Driehaus’s Driehaus Capital said goodbye to the biggest stake of all the hedgies monitored by Insider Monkey, comprising close to $2.2 million in stock, and Israel Englander’s Millennium Management was right behind this move, as the fund sold off about $0.4 million worth. These moves are interesting, as aggregate hedge fund interest dropped by 1 funds in the third quarter.

As you can see these stocks had an average of 11.5 hedge funds with bullish positions and the average amount invested in these stocks was $23 million. That figure was $23 million in ULH’s case. National CineMedia, Inc. (NASDAQ:NCMI) is the most popular stock in this table. On the other hand First Community Bankshares Inc (NASDAQ:FCBC) is the least popular one with only 3 bullish hedge fund positions. Universal Logistics Holdings, Inc. (NASDAQ:ULH) is not the least popular stock in this group but hedge fund interest is still below average. Our calculations showed that top 15 most popular stocks) among hedge funds returned 24.2% through April 22nd and outperformed the S&P 500 ETF (SPY) by more than 7 percentage points. A small number of hedge funds were also right about betting on ULH, though not to the same extent, as the stock returned 24.1% and outperformed the market as well.