Insider Monkey has processed numerous 13F filings of hedge funds and successful value investors to create an extensive database of hedge fund holdings. The 13F filings show the hedge funds’ and successful investors’ positions as of the end of the second quarter. You can find write-ups about an individual hedge fund’s trades on numerous financial news websites. However, in this article we will take a look at their collective moves and analyze what the smart money thinks of Unitil Corporation (NYSE:UTL) based on that data.

Unitil Corporation (NYSE:UTL) investors should be aware of a decrease in enthusiasm from smart money lately. UTL was in 9 hedge funds’ portfolios at the end of the second quarter of 2019. There were 10 hedge funds in our database with UTL holdings at the end of the previous quarter. Our calculations also showed that UTL isn’t among the 30 most popular stocks among hedge funds (see the video below).

Unlike former hedge manager, Dr. Steve Sjuggerud, who is convinced Dow will soar past 40000, our long-short investment strategy doesn’t rely on bull markets to deliver double digit returns. We only rely on hedge fund buy/sell signals. We’re going to check out the new hedge fund action regarding Unitil Corporation (NYSE:UTL).

Heading into the third quarter of 2019, a total of 9 of the hedge funds tracked by Insider Monkey held long positions in this stock, a change of -10% from the first quarter of 2019. On the other hand, there were a total of 10 hedge funds with a bullish position in UTL a year ago. With the smart money’s capital changing hands, there exists a few key hedge fund managers who were adding to their stakes substantially (or already accumulated large positions). 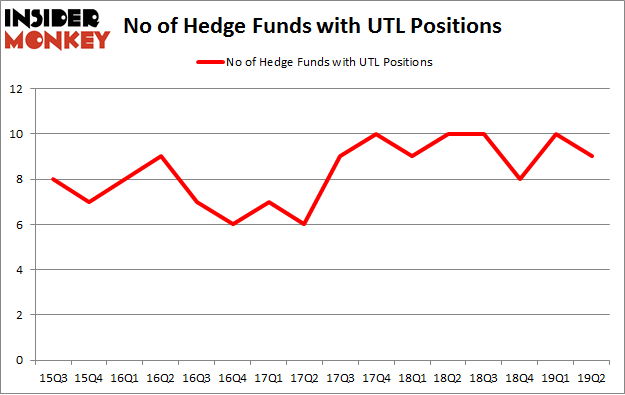 According to Insider Monkey’s hedge fund database, Renaissance Technologies has the most valuable position in Unitil Corporation (NYSE:UTL), worth close to $53.3 million, comprising less than 0.1%% of its total 13F portfolio. Coming in second is Impax Asset Management, managed by Ian Simm, which holds a $21.8 million position; 0.3% of its 13F portfolio is allocated to the stock. Other peers that hold long positions comprise Noam Gottesman’s GLG Partners, Israel Englander’s Millennium Management and Cliff Asness’s AQR Capital Management.

We view hedge fund activity in the stock unfavorable, but in this case there was only a single hedge fund selling its entire position: Adage Capital Management. One hedge fund selling its entire position doesn’t always imply a bearish intent. Theoretically a hedge fund may decide to sell a promising position in order to invest the proceeds in a more promising idea. However, we don’t think this is the case in this case because only one of the 800+ hedge funds tracked by Insider Monkey identified as a viable investment and initiated a position in the stock (that fund was Citadel Investment Group).

As you can see these stocks had an average of 9.25 hedge funds with bullish positions and the average amount invested in these stocks was $94 million. That figure was $86 million in UTL’s case. Stoneridge, Inc. (NYSE:SRI) is the most popular stock in this table. On the other hand Golden Ocean Group Limited (NASDAQ:GOGL) is the least popular one with only 7 bullish hedge fund positions. Unitil Corporation (NYSE:UTL) is not the least popular stock in this group but hedge fund interest is still below average. Our calculations showed that top 20 most popular stocks among hedge funds returned 24.4% in 2019 through September 30th and outperformed the S&P 500 ETF (SPY) by 4 percentage points. A small number of hedge funds were also right about betting on UTL as the stock returned 6.6% during the same time frame and outperformed the market by an even larger margin.