Is United Continental Holdings Inc (NASDAQ:UAL) a buy here? Prominent investors are getting more optimistic. The number of long hedge fund positions improved by 6 lately. Our calculations also showed that UAL isn’t among the 30 most popular stocks among hedge funds.

What does the smart money think about United Continental Holdings Inc (NASDAQ:UAL)? 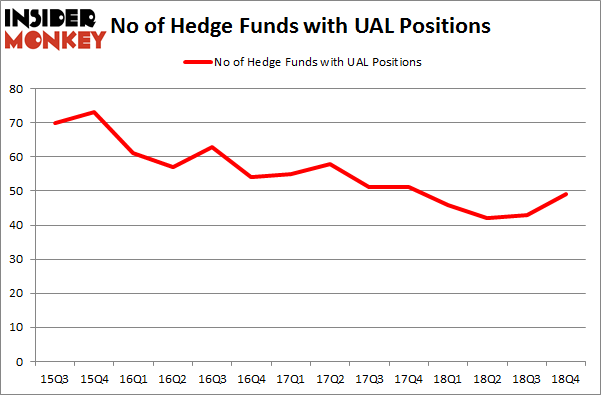 When looking at the institutional investors followed by Insider Monkey, Warren Buffett’s Berkshire Hathaway has the most valuable position in United Continental Holdings Inc (NASDAQ:UAL), worth close to $1.8369 billion, amounting to 1% of its total 13F portfolio. On Berkshire Hathaway’s heels is Paul Reeder and Edward Shapiro of PAR Capital Management, with a $1.3082 billion position; 21.9% of its 13F portfolio is allocated to the stock. Other peers with similar optimism include Brad Gerstner’s Altimeter Capital Management, Alex Snow’s Lansdowne Partners and Ric Dillon’s Diamond Hill Capital.

As you can see these stocks had an average of 26.5 hedge funds with bullish positions and the average amount invested in these stocks was $639 million. That figure was $6716 million in UAL’s case. SunTrust Banks, Inc. (NYSE:STI) is the most popular stock in this table. On the other hand Brown-Forman Corporation (NYSE:BF-B) is the least popular one with only 21 bullish hedge fund positions. Compared to these stocks United Continental Holdings Inc (NASDAQ:UAL) is more popular among hedge funds. Considering that hedge funds are fond of this stock in relation to its market cap peers, it may be a good idea to analyze it in detail and potentially include it in your portfolio. Our calculations showed that top 15 most popular stocks among hedge funds returned 19.7% through March 15th and outperformed the S&P 500 ETF (SPY) by 6.6 percentage points. Unfortunately UAL wasn’t in this group. Hedge funds that bet on UAL were disappointed as the stock lost 2.4% and underperformed the market. If you are interested in investing in large cap stocks, you should check out the top 15 hedge fund stocks as 13 of these outperformed the market.