As we already know from media reports and hedge fund investor letters, many hedge funds lost money in fourth quarter, blaming macroeconomic conditions and unpredictable events that hit several sectors, with technology among them. Nevertheless, most investors decided to stick to their bullish theses and their long-term focus allows us to profit from the recent declines. In particular, let’s take a look at what hedge funds think about UGI Corp (NYSE:UGI) in this article.

UGI Corp (NYSE:UGI) investors should pay attention to an increase in hedge fund interest recently. UGI was in 24 hedge funds’ portfolios at the end of the fourth quarter of 2018. There were 19 hedge funds in our database with UGI positions at the end of the previous quarter. Our calculations also showed that UGI isn’t among the 30 most popular stocks among hedge funds.

Heading into the first quarter of 2019, a total of 24 of the hedge funds tracked by Insider Monkey were bullish on this stock, a change of 26% from the previous quarter. The graph below displays the number of hedge funds with bullish position in UGI over the last 14 quarters. With hedgies’ positions undergoing their usual ebb and flow, there exists an “upper tier” of key hedge fund managers who were upping their stakes substantially (or already accumulated large positions). 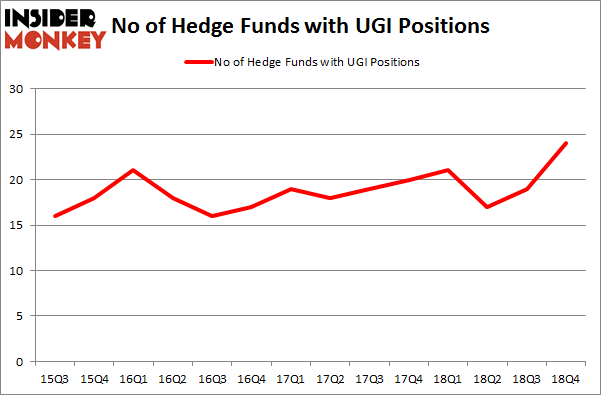 Among these funds, Renaissance Technologies held the most valuable stake in UGI Corp (NYSE:UGI), which was worth $146.4 million at the end of the third quarter. On the second spot was Diamond Hill Capital which amassed $102.2 million worth of shares. Moreover, AQR Capital Management, GLG Partners, and Arrowstreet Capital were also bullish on UGI Corp (NYSE:UGI), allocating a large percentage of their portfolios to this stock.

As aggregate interest increased, key money managers have been driving this bullishness. Bridgewater Associates, managed by Ray Dalio, assembled the most outsized position in UGI Corp (NYSE:UGI). Bridgewater Associates had $1.9 million invested in the company at the end of the quarter. Benjamin A. Smith’s Laurion Capital Management also made a $0.7 million investment in the stock during the quarter. The other funds with brand new UGI positions are Minhua Zhang’s Weld Capital Management, David Costen Haley’s HBK Investments, and Michael Platt and William Reeves’s BlueCrest Capital Mgmt..

As you can see these stocks had an average of 11 hedge funds with bullish positions and the average amount invested in these stocks was $297 million. That figure was $488 million in UGI’s case. Alleghany Corporation (NYSE:Y) is the most popular stock in this table. On the other hand Canopy Growth Corporation (NYSE:CGC) is the least popular one with only 5 bullish hedge fund positions. Compared to these stocks UGI Corp (NYSE:UGI) is more popular among hedge funds. Considering that hedge funds are fond of this stock in relation to its market cap peers, it may be a good idea to analyze it in detail and potentially include it in your portfolio. Our calculations showed that top 15 most popular stocks among hedge funds returned 19.7% through March 15th and outperformed the S&P 500 ETF (SPY) by 6.6 percentage points. Unfortunately UGI wasn’t in this group. A handful of hedge funds that bet on UGI were disappointed as the stock returned 3.5 % and underperformed the market. If you are interested in investing in large cap stocks, you should check out the top 15 hedge fund stocks as 13 of these outperformed the market.