Although the masses and most of the financial media blame hedge funds for their exorbitant fee structure and disappointing performance, these investors have proved to have great stock picking abilities over the years (that’s why their assets under management continue to swell). We believe hedge fund sentiment should serve as a crucial tool of an individual investor’s stock selection process, as it may offer great insights of how the brightest minds of the finance industry feel about specific stocks. After all, these people have access to smartest analysts and expensive data/information sources that individual investors can’t match. So should one consider investing in Two Harbors Investment Corp (NYSE:TWO)? The smart money sentiment can provide an answer to this question.

Is Two Harbors Investment Corp (NYSE:TWO) a bargain? The best stock pickers are in a bearish mood. The number of long hedge fund bets shrunk by 5 recently. Our calculations also showed that TWO isn’t among the 30 most popular stocks among hedge funds (view the video below). TWO was in 13 hedge funds’ portfolios at the end of the second quarter of 2019. There were 18 hedge funds in our database with TWO positions at the end of the previous quarter.

In the eyes of most market participants, hedge funds are perceived as worthless, old investment tools of the past. While there are more than 8000 funds trading at the moment, We look at the crème de la crème of this group, approximately 750 funds. These investment experts preside over the lion’s share of the hedge fund industry’s total capital, and by observing their matchless investments, Insider Monkey has deciphered a number of investment strategies that have historically exceeded Mr. Market. Insider Monkey’s flagship hedge fund strategy surpassed the S&P 500 index by around 5 percentage points a year since its inception in May 2014. We were able to generate large returns even by identifying short candidates. Our portfolio of short stocks lost 25.7% since February 2017 (through September 30th) even though the market was up more than 33% during the same period. We just shared a list of 10 short targets in our latest quarterly update .

Heading into the third quarter of 2019, a total of 13 of the hedge funds tracked by Insider Monkey were long this stock, a change of -28% from one quarter earlier. Below, you can check out the change in hedge fund sentiment towards TWO over the last 16 quarters. So, let’s review which hedge funds were among the top holders of the stock and which hedge funds were making big moves. 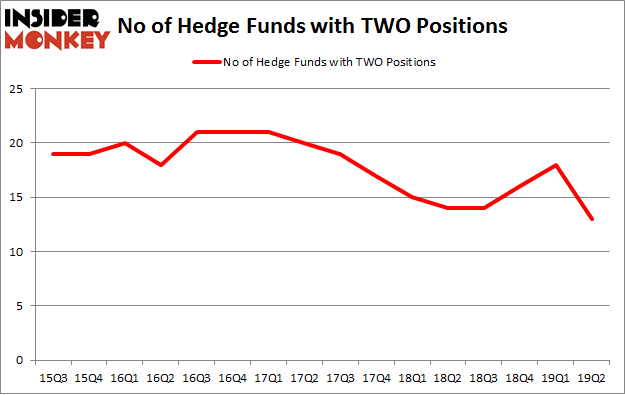 Among these funds, Citadel Investment Group held the most valuable stake in Two Harbors Investment Corp (NYSE:TWO), which was worth $11.6 million at the end of the second quarter. On the second spot was Millennium Management which amassed $11.1 million worth of shares. Moreover, BlueMar Capital Management, Miller Value Partners, and Almitas Capital were also bullish on Two Harbors Investment Corp (NYSE:TWO), allocating a large percentage of their portfolios to this stock.

Because Two Harbors Investment Corp (NYSE:TWO) has faced a decline in interest from the entirety of the hedge funds we track, logic holds that there is a sect of hedge funds who were dropping their full holdings in the second quarter. Intriguingly, Israel Englander’s Millennium Management said goodbye to the biggest stake of all the hedgies monitored by Insider Monkey, valued at close to $24.3 million in stock, and Jeffrey Talpins’s Element Capital Management was right behind this move, as the fund said goodbye to about $20.3 million worth. These bearish behaviors are important to note, as aggregate hedge fund interest fell by 5 funds in the second quarter.

As you can see these stocks had an average of 19.25 hedge funds with bullish positions and the average amount invested in these stocks was $233 million. That figure was $42 million in TWO’s case. Corelogic Inc (NYSE:CLGX) is the most popular stock in this table. On the other hand National Health Investors Inc (NYSE:NHI) is the least popular one with only 13 bullish hedge fund positions. Compared to these stocks Two Harbors Investment Corp (NYSE:TWO) is even less popular than NHI. Hedge funds clearly dropped the ball on TWO as the stock delivered strong returns, though hedge funds’ consensus picks still generated respectable returns. Our calculations showed that top 20 most popular stocks among hedge funds returned 24.4% in 2019 through September 30th and outperformed the S&P 500 ETF (SPY) by 4 percentage points. A small number of hedge funds were also right about betting on TWO as the stock returned 6.8% during the third quarter and outperformed the market by an even larger margin.