Investing in small cap stocks has historically been a way to outperform the market, as small cap companies typically grow faster on average than the blue chips. That outperformance comes with a price, however, as there are occasional periods of higher volatility. The last 12 months is one of those periods, as the Russell 2000 ETF (IWM) has underperformed the larger S&P 500 ETF (SPY) by more than 10 percentage points. Given that the funds we track tend to have a disproportionate amount of their portfolios in smaller cap stocks, they have seen some volatility in their portfolios too. Actually their moves are potentially one of the factors that contributed to this volatility. In this article, we use our extensive database of hedge fund holdings to find out what the smart money thinks of Trueblue Inc (NYSE:TBI).

Trueblue Inc (NYSE:TBI) has experienced a decrease in hedge fund interest recently. TBI was in 15 hedge funds’ portfolios at the end of the second quarter of 2019. There were 17 hedge funds in our database with TBI holdings at the end of the previous quarter. Our calculations also showed that TBI isn’t among the 30 most popular stocks among hedge funds (see the video below).

Unlike former hedge manager, Dr. Steve Sjuggerud, who is convinced Dow will soar past 40000, our long-short investment strategy doesn’t rely on bull markets to deliver double digit returns. We only rely on hedge fund buy/sell signals. Let’s take a gander at the recent hedge fund action regarding Trueblue Inc (NYSE:TBI).

At the end of the second quarter, a total of 15 of the hedge funds tracked by Insider Monkey were bullish on this stock, a change of -12% from the first quarter of 2019. By comparison, 16 hedge funds held shares or bullish call options in TBI a year ago. With hedgies’ sentiment swirling, there exists an “upper tier” of key hedge fund managers who were adding to their holdings substantially (or already accumulated large positions). 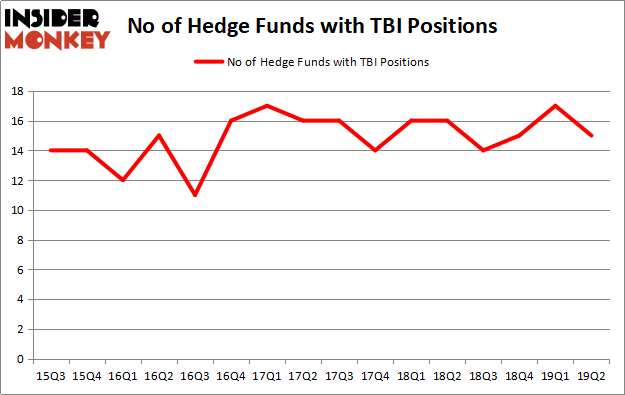 More specifically, GMT Capital was the largest shareholder of Trueblue Inc (NYSE:TBI), with a stake worth $46.6 million reported as of the end of March. Trailing GMT Capital was AQR Capital Management, which amassed a stake valued at $11.9 million. D E Shaw, Royce & Associates, and Arrowstreet Capital were also very fond of the stock, giving the stock large weights in their portfolios.

Since Trueblue Inc (NYSE:TBI) has witnessed declining sentiment from hedge fund managers, it’s easy to see that there was a specific group of fund managers that slashed their full holdings in the second quarter. At the top of the heap, David Costen Haley’s HBK Investments cut the largest position of all the hedgies followed by Insider Monkey, worth about $0.7 million in stock, and Andrew Feldstein and Stephen Siderow’s Blue Mountain Capital was right behind this move, as the fund dumped about $0.7 million worth. These moves are important to note, as aggregate hedge fund interest fell by 2 funds in the second quarter.