As we already know from media reports and hedge fund investor letters, hedge funds delivered their best returns in a decade. Most investors who decided to stick with hedge funds after a rough 2018 recouped their losses by the end of the second quarter. We get to see hedge funds’ thoughts towards the market and individual stocks by aggregating their quarterly portfolio movements and reading their investor letters. In this article, we will particularly take a look at what hedge funds think about Triumph Group Inc (NYSE:TGI).

Triumph Group Inc (NYSE:TGI) shares haven’t seen a lot of action during the second quarter. Overall, hedge fund sentiment was unchanged. The stock was in 12 hedge funds’ portfolios at the end of the second quarter of 2019. The level and the change in hedge fund popularity aren’t the only variables you need to analyze to decipher hedge funds’ perspectives. A stock may witness a boost in popularity but it may still be less popular than similarly priced stocks. That’s why at the end of this article we will examine companies such as Opera Limited (NASDAQ:OPRA), Garrett Motion Inc. (NYSE:GTX), and Cryolife Inc (NYSE:CRY) to gather more data points. Our calculations also showed that TGI isn’t among the 30 most popular stocks among hedge funds (see the video below).

How have hedgies been trading Triumph Group Inc (NYSE:TGI)? 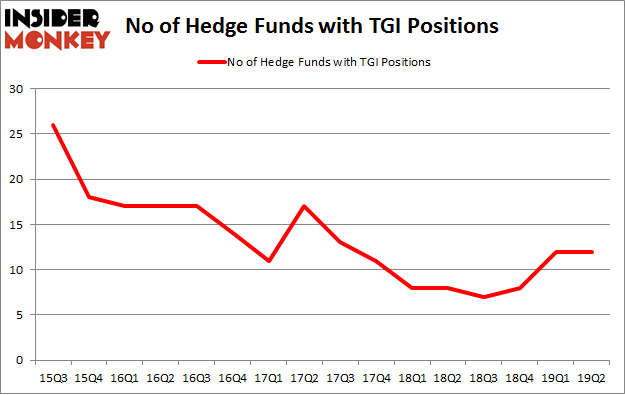 When looking at the institutional investors followed by Insider Monkey, Renaissance Technologies holds the biggest position in Triumph Group Inc (NYSE:TGI). Renaissance Technologies has a $26.8 million position in the stock, comprising less than 0.1%% of its 13F portfolio. Coming in second is D E Shaw, led by D. E. Shaw, holding a $13.8 million position; the fund has less than 0.1%% of its 13F portfolio invested in the stock. Other hedge funds and institutional investors that hold long positions include Chuck Royce’s Royce & Associates, Ken Griffin’s Citadel Investment Group and Israel Englander’s Millennium Management.

Because Triumph Group Inc (NYSE:TGI) has experienced falling interest from the smart money, we can see that there is a sect of money managers that slashed their positions entirely by the end of the second quarter. At the top of the heap, Louis Bacon’s Moore Global Investments said goodbye to the largest investment of the 750 funds watched by Insider Monkey, valued at about $1 million in stock, and Paul Marshall and Ian Wace’s Marshall Wace LLP was right behind this move, as the fund said goodbye to about $0.5 million worth. These bearish behaviors are interesting, as total hedge fund interest stayed the same (this is a bearish signal in our experience).

Let’s now take a look at hedge fund activity in other stocks similar to Triumph Group Inc (NYSE:TGI). We will take a look at Opera Limited (NASDAQ:OPRA), Garrett Motion Inc. (NYSE:GTX), Cryolife Inc (NYSE:CRY), and Geopark Limited (NYSE:GPRK). All of these stocks’ market caps are closest to TGI’s market cap.

As you can see these stocks had an average of 13.5 hedge funds with bullish positions and the average amount invested in these stocks was $113 million. That figure was $62 million in TGI’s case. Garrett Motion Inc. (NYSE:GTX) is the most popular stock in this table. On the other hand Opera Limited (NASDAQ:OPRA) is the least popular one with only 6 bullish hedge fund positions. Triumph Group Inc (NYSE:TGI) is not the least popular stock in this group but hedge fund interest is still below average. This is a slightly negative signal and we’d rather spend our time researching stocks that hedge funds are piling on. Our calculations showed that top 20 most popular stocks among hedge funds returned 24.4% in 2019 through September 30th and outperformed the S&P 500 ETF (SPY) by 4 percentage points. Unfortunately TGI wasn’t nearly as popular as these 20 stocks (hedge fund sentiment was quite bearish); TGI investors were disappointed as the stock returned 0.1% during the third quarter and underperformed the market. If you are interested in investing in large cap stocks with huge upside potential, you should check out the top 20 most popular stocks among hedge funds as many of these stocks already outperformed the market so far in 2019.