Our extensive research has shown that imitating the smart money can generate significant returns for retail investors, which is why we track nearly 750 active prominent money managers and analyze their quarterly 13F filings. The stocks that are heavily bought by hedge funds historically outperformed the market, though there is no shortage of high profile failures like hedge funds’ recent losses in Facebook. Let’s take a closer look at what the funds we track think about TPI Composites, Inc. (NASDAQ:TPIC) in this article.

TPI Composites, Inc. (NASDAQ:TPIC) was in 13 hedge funds’ portfolios at the end of the fourth quarter of 2018. TPIC investors should pay attention to a decrease in hedge fund interest lately. There were 17 hedge funds in our database with TPIC holdings at the end of the previous quarter. Our calculations also showed that tpic isn’t among the 30 most popular stocks among hedge funds.

What does the smart money think about TPI Composites, Inc. (NASDAQ:TPIC)? 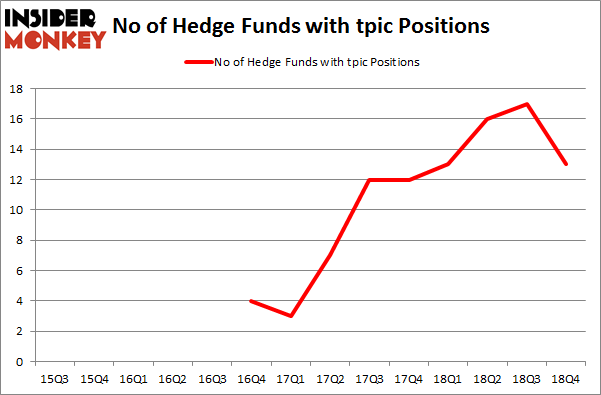 The largest stake in TPI Composites, Inc. (NASDAQ:TPIC) was held by Trigran Investments, which reported holding $46.5 million worth of stock at the end of December. It was followed by Redwood Capital Management with a $9.1 million position. Other investors bullish on the company included Parian Global Management, Arosa Capital Management, and Driehaus Capital.

Judging by the fact that TPI Composites, Inc. (NASDAQ:TPIC) has faced falling interest from the smart money, logic holds that there exists a select few money managers who sold off their full holdings heading into Q3. Interestingly, Richard S. Meisenberg’s ACK Asset Management said goodbye to the biggest investment of all the hedgies followed by Insider Monkey, worth about $9.3 million in stock, and Jim Simons’s Renaissance Technologies was right behind this move, as the fund dumped about $7.8 million worth. These moves are intriguing to say the least, as total hedge fund interest dropped by 4 funds heading into Q3.

Let’s now take a look at hedge fund activity in other stocks – not necessarily in the same industry as TPI Composites, Inc. (NASDAQ:TPIC) but similarly valued. We will take a look at Laredo Petroleum Inc (NYSE:LPI), The Gorman-Rupp Company (NYSE:GRC), The Andersons, Inc. (NASDAQ:ANDE), and OFG Bancorp (NYSE:OFG). This group of stocks’ market caps resemble TPIC’s market cap.

As you can see these stocks had an average of 11 hedge funds with bullish positions and the average amount invested in these stocks was $84 million. That figure was $90 million in TPIC’s case. OFG Bancorp (NYSE:OFG) is the most popular stock in this table. On the other hand The Andersons, Inc. (NASDAQ:ANDE) is the least popular one with only 6 bullish hedge fund positions. TPI Composites, Inc. (NASDAQ:TPIC) is not the most popular stock in this group but hedge fund interest is still above average. Our calculations showed that top 15 most popular stocks) among hedge funds returned 24.2% through April 22nd and outperformed the S&P 500 ETF (SPY) by more than 7 percentage points. Hedge funds were also right about betting on TPIC as the stock returned 26% and outperformed the market by an even larger margin. Hedge funds were rewarded for their relative bullishness.