Legendary investors such as Jeffrey Talpins and Seth Klarman earn enormous amounts of money for themselves and their investors by doing in-depth research on small-cap stocks that big brokerage houses don’t publish. Small cap stocks -especially when they are screened well- can generate substantial outperformance versus a boring index fund. That’s why we analyze the activity of those elite funds in these small-cap stocks. In the following paragraphs, we analyze TPG Pace Holdings Corp. (NYSE:TPGH) from the perspective of those elite funds.

TPG Pace Holdings Corp. (NYSE:TPGH) shares haven’t seen a lot of action during the third quarter. Overall, hedge fund sentiment was unchanged. The stock was in 17 hedge funds’ portfolios at the end of the fourth quarter of 2018. At the end of this article we will also compare TPGH to other stocks including DHT Holdings Inc (NYSE:DHT), Establishment Labs Holdings Inc. (NASDAQ:ESTA), and Tristate Capital Holdings Inc (NASDAQ:TSC) to get a better sense of its popularity.

At the end of the fourth quarter, a total of 17 of the hedge funds tracked by Insider Monkey held long positions in this stock, a change of 0% from one quarter earlier. By comparison, 18 hedge funds held shares or bullish call options in TPGH a year ago. With the smart money’s capital changing hands, there exists a select group of key hedge fund managers who were adding to their holdings significantly (or already accumulated large positions). 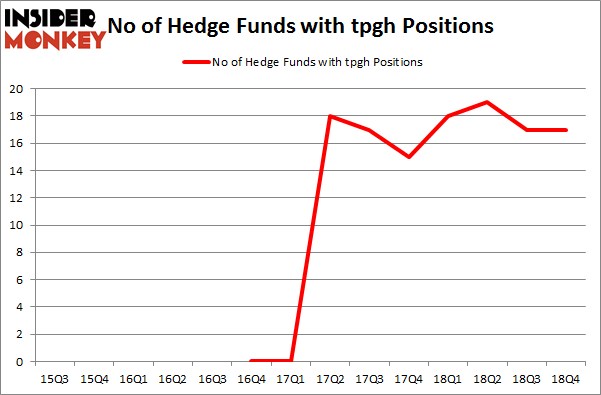 The largest stake in TPG Pace Holdings Corp. (NYSE:TPGH) was held by Highbridge Capital Management, which reported holding $25 million worth of stock at the end of December. It was followed by Arrowgrass Capital Partners with a $22.9 million position. Other investors bullish on the company included Governors Lane, Alyeska Investment Group, and Glazer Capital.

Seeing as TPG Pace Holdings Corp. (NYSE:TPGH) has witnessed a decline in interest from the entirety of the hedge funds we track, logic holds that there is a sect of funds that slashed their positions entirely in the third quarter. Intriguingly, Derek C. Schrier’s Indaba Capital Management said goodbye to the largest position of the 700 funds tracked by Insider Monkey, comprising close to $15.1 million in stock. Jamie Mendola’s fund, Pacific Grove Capital, also said goodbye to its stock, about $6.9 million worth. These bearish behaviors are interesting, as aggregate hedge fund interest stayed the same (this is a bearish signal in our experience).

As you can see these stocks had an average of 11.5 hedge funds with bullish positions and the average amount invested in these stocks was $61 million. That figure was $190 million in TPGH’s case. DHT Holdings Inc (NYSE:DHT) is the most popular stock in this table. On the other hand Camden National Corporation (NASDAQ:CAC) is the least popular one with only 6 bullish hedge fund positions. TPG Pace Holdings Corp. (NYSE:TPGH) is not the most popular stock in this group but hedge fund interest is still above average. This is a slightly positive signal but we’d rather spend our time researching stocks that hedge funds are piling on. Our calculations showed that top 15 most popular stocks) among hedge funds returned 24.2% through April 22nd and outperformed the S&P 500 ETF (SPY) by more than 7 percentage points. Unfortunately TPGH wasn’t nearly as popular as these 15 stock and hedge funds that were betting on TPGH were disappointed as the stock returned 2.8% and underperformed the market. If you are interested in investing in large cap stocks with huge upside potential, you should check out the top 15 most popular stocks) among hedge funds as 13 of these stocks already outperformed the market this year.