The latest 13F reporting period has come and gone, and Insider Monkey is again at the forefront when it comes to making use of this gold mine of data. We have processed the filings of the more than 700 world-class investment firms that we track and now have access to the collective wisdom contained in these filings, which are based on their March 31 holdings, data that is available nowhere else. Should you consider Tower Semiconductor Ltd. (NASDAQ:TSEM) for your portfolio? We’ll look to this invaluable collective wisdom for the answer.

Tower Semiconductor Ltd. (NASDAQ:TSEM) was in 12 hedge funds’ portfolios at the end of the first quarter of 2019. TSEM shareholders have witnessed a decrease in activity from the world’s largest hedge funds lately. There were 16 hedge funds in our database with TSEM holdings at the end of the previous quarter. Our calculations also showed that TSEM isn’t among the 30 most popular stocks among hedge funds.

According to most market participants, hedge funds are assumed to be slow, old financial tools of years past. While there are more than 8000 funds trading at the moment, Our experts look at the aristocrats of this group, about 750 funds. It is estimated that this group of investors preside over most of the hedge fund industry’s total asset base, and by following their top equity investments, Insider Monkey has determined a number of investment strategies that have historically outrun Mr. Market. Insider Monkey’s flagship hedge fund strategy outperformed the S&P 500 index by around 5 percentage points annually since its inception in May 2014 through June 18th. We were able to generate large returns even by identifying short candidates. Our portfolio of short stocks lost 28.2% since February 2017 (through June 18th) even though the market was up nearly 30% during the same period. We just shared a list of 5 short targets in our latest quarterly update and they are already down an average of 8.2% in a month whereas our long picks outperformed the market by 2.5 percentage points in this volatile 5 week period (our long picks also beat the market by 15 percentage points so far this year).

At the end of the first quarter, a total of 12 of the hedge funds tracked by Insider Monkey were long this stock, a change of -25% from one quarter earlier. By comparison, 15 hedge funds held shares or bullish call options in TSEM a year ago. With hedge funds’ sentiment swirling, there exists an “upper tier” of notable hedge fund managers who were boosting their stakes substantially (or already accumulated large positions). 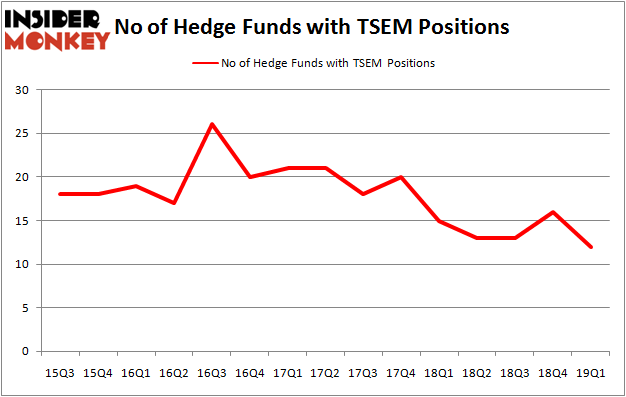 More specifically, Rima Senvest Management was the largest shareholder of Tower Semiconductor Ltd. (NASDAQ:TSEM), with a stake worth $152.1 million reported as of the end of March. Trailing Rima Senvest Management was D E Shaw, which amassed a stake valued at $51.9 million. Renaissance Technologies, Two Sigma Advisors, and Moab Capital Partners were also very fond of the stock, giving the stock large weights in their portfolios.

Due to the fact that Tower Semiconductor Ltd. (NASDAQ:TSEM) has witnessed a decline in interest from the smart money, logic holds that there is a sect of hedgies that decided to sell off their positions entirely by the end of the third quarter. At the top of the heap, Richard Mashaal’s Rima Senvest Management said goodbye to the largest stake of all the hedgies followed by Insider Monkey, comprising about $1.5 million in stock. Minhua Zhang’s fund, Weld Capital Management, also sold off its stock, about $0.6 million worth. These transactions are important to note, as aggregate hedge fund interest dropped by 4 funds by the end of the third quarter.

As you can see these stocks had an average of 18.25 hedge funds with bullish positions and the average amount invested in these stocks was $214 million. That figure was $258 million in TSEM’s case. Cannae Holdings, Inc. (NYSE:CNNE) is the most popular stock in this table. On the other hand Cubic Corporation (NYSE:CUB) is the least popular one with only 15 bullish hedge fund positions. Compared to these stocks Tower Semiconductor Ltd. (NASDAQ:TSEM) is even less popular than CUB. Hedge funds dodged a bullet by taking a bearish stance towards TSEM. Our calculations showed that the top 20 most popular hedge fund stocks returned 6.2% in Q2 through June 19th and outperformed the S&P 500 ETF (SPY) by nearly 3 percentage points. Unfortunately TSEM wasn’t nearly as popular as these 20 stocks (hedge fund sentiment was very bearish); TSEM investors were disappointed as the stock returned -6.3% during the same time frame and underperformed the market. If you are interested in investing in large cap stocks with huge upside potential, you should check out the top 20 most popular stocks among hedge funds as 13 of these stocks already outperformed the market so far in the second quarter.

Is NOW Inc (DNOW) A Good Stock To Buy?
Monthly Newsletter Strategy
Download a free copy of our newsletter and see the details inside!
Hedge Fund Resource Center
Related News
Should You Buy Tower Semiconductor Ltd. (TSEM)? 35 Fresh Stories That You Should Read To Know How The Financial Markets Are Doing Today Is Tower Semiconductor Ltd. (USA) (TSEM) A Good Stock To Buy Right Now? Are Investors Right To Be Bullish On Deckers Outdoor Corp (DECK), Tower Semiconductor Ltd. (TSEM), More? Here’s Why These Five Stocks Are on the Move on Thursday RIMA Senvest Grows Even More Bullish On Top Holdings Here’s Why These 4 Stocks Made Big Moves Thursday 25 Biggest Activist Short Sellers in the Hedge Fund World 21 Best Tinder Bio Examples for Newly Single Moms 17 Best Excuses to Get Out of Work
Billionaire Hedge Funds