Insider Monkey finished processing more than 700 13F filings submitted by hedge funds and prominent investors. These filings show these funds’ portfolio positions as of December 31st, 2018. In this article we are going to take a look at smart money sentiment towards Tootsie Roll Industries, Inc. (NYSE:TR).

Is Tootsie Roll Industries, Inc. (NYSE:TR) a worthy investment now? Prominent investors are getting less bullish. The number of bullish hedge fund positions shrunk by 1 in recent months. Our calculations also showed that TR isn’t among the 30 most popular stocks among hedge funds. TR was in 11 hedge funds’ portfolios at the end of the fourth quarter of 2018. There were 12 hedge funds in our database with TR positions at the end of the previous quarter.

In the financial world there are a lot of methods stock market investors employ to value publicly traded companies. A duo of the less utilized methods are hedge fund and insider trading moves. We have shown that, historically, those who follow the top picks of the top investment managers can outpace the broader indices by a significant margin (see the details here). 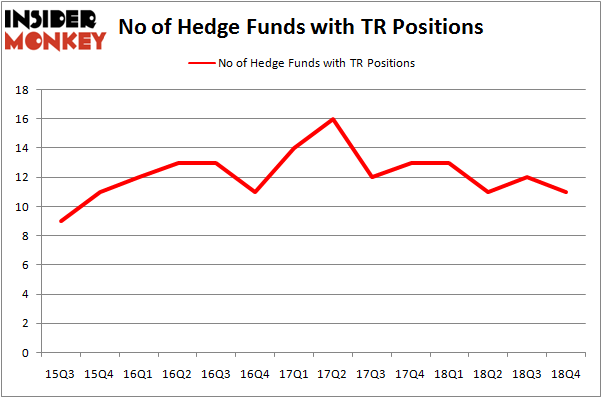 Of the funds tracked by Insider Monkey, GAMCO Investors, managed by Mario Gabelli, holds the largest position in Tootsie Roll Industries, Inc. (NYSE:TR). GAMCO Investors has a $33.1 million position in the stock, comprising 0.3% of its 13F portfolio. On GAMCO Investors’s heels is Chuck Royce of Royce & Associates, with a $27.3 million position; the fund has 0.2% of its 13F portfolio invested in the stock. Remaining professional money managers that are bullish include Jim Simons’s Renaissance Technologies, John D. Gillespie’s Prospector Partners and Scott Wallace’s Wallace Capital Management.

Due to the fact that Tootsie Roll Industries, Inc. (NYSE:TR) has experienced bearish sentiment from hedge fund managers, it’s easy to see that there were a few fund managers who sold off their entire stakes in the third quarter. Interestingly, Noam Gottesman’s GLG Partners dumped the biggest investment of the 700 funds tracked by Insider Monkey, worth an estimated $1 million in stock, and Ken Griffin’s Citadel Investment Group was right behind this move, as the fund cut about $0.3 million worth. These bearish behaviors are important to note, as aggregate hedge fund interest was cut by 1 funds in the third quarter.

As you can see these stocks had an average of 16 hedge funds with bullish positions and the average amount invested in these stocks was $61 million. That figure was $81 million in TR’s case. Phibro Animal Health Corp (NASDAQ:PAHC) is the most popular stock in this table. On the other hand U.S. Physical Therapy, Inc. (NYSE:USPH) is the least popular one with only 11 bullish hedge fund positions. Compared to these stocks Tootsie Roll Industries, Inc. (NYSE:TR) is even less popular than USPH. Hedge funds dodged a bullet by taking a bearish stance towards TR. Our calculations showed that the top 15 most popular hedge fund stocks returned 24.2% through April 22nd and outperformed the S&P 500 ETF (SPY) by more than 7 percentage points. Unfortunately TR wasn’t nearly as popular as these 15 stock (hedge fund sentiment was very bearish); TR investors were disappointed as the stock returned 16.2% and underperformed the market. If you are interested in investing in large cap stocks with huge upside potential, you should check out the top 15 most popular stocks) among hedge funds as 13 of these stocks already outperformed the market this year.