Insider Monkey finished processing more than 738 13F filings submitted by hedge funds and prominent investors. These filings show these funds’ portfolio positions as of March 31st, 2019. What do these smart investors think about The Simply Good Foods Company (NASDAQ:SMPL)?

Is The Simply Good Foods Company (NASDAQ:SMPL) a buy, sell, or hold? Prominent investors are taking a bearish view. The number of long hedge fund positions decreased by 3 in recent months. Our calculations also showed that SMPL isn’t among the 30 most popular stocks among hedge funds. SMPL was in 22 hedge funds’ portfolios at the end of the first quarter of 2019. There were 25 hedge funds in our database with SMPL holdings at the end of the previous quarter.

To most market participants, hedge funds are viewed as worthless, outdated investment vehicles of yesteryear. While there are more than 8000 funds trading at the moment, We choose to focus on the aristocrats of this club, about 750 funds. These investment experts control most of all hedge funds’ total asset base, and by observing their top equity investments, Insider Monkey has spotted a number of investment strategies that have historically outstripped the S&P 500 index. Insider Monkey’s flagship hedge fund strategy outpaced the S&P 500 index by around 5 percentage points per annum since its inception in May 2014 through the end of May. We were able to generate large returns even by identifying short candidates. Our portfolio of short stocks lost 30.9% since February 2017 (through May 30th) even though the market was up nearly 24% during the same period. We just shared a list of 5 short targets in our latest quarterly update and they are already down an average of 11.9% in less than a couple of weeks whereas our long picks outperformed the market by 2 percentage points in this volatile 2 week period.

We’re going to take a glance at the new hedge fund action regarding The Simply Good Foods Company (NASDAQ:SMPL).

Heading into the second quarter of 2019, a total of 22 of the hedge funds tracked by Insider Monkey were long this stock, a change of -12% from the fourth quarter of 2018. The graph below displays the number of hedge funds with bullish position in SMPL over the last 15 quarters. With hedgies’ capital changing hands, there exists a few noteworthy hedge fund managers who were boosting their stakes considerably (or already accumulated large positions). 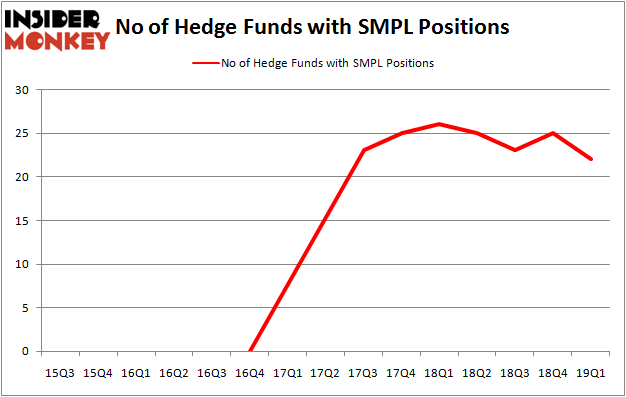 According to publicly available hedge fund and institutional investor holdings data compiled by Insider Monkey, Daniel Lascano’s Lomas Capital Management has the largest position in The Simply Good Foods Company (NASDAQ:SMPL), worth close to $41.9 million, corresponding to 4.5% of its total 13F portfolio. The second largest stake is held by Jim Simons of Renaissance Technologies, with a $34.8 million position; less than 0.1%% of its 13F portfolio is allocated to the stock. Some other members of the smart money that hold long positions comprise D. E. Shaw’s D E Shaw, James Woodson Davis’s Woodson Capital Management and Israel Englander’s Millennium Management.

Seeing as The Simply Good Foods Company (NASDAQ:SMPL) has witnessed a decline in interest from the smart money, logic holds that there were a few money managers that decided to sell off their positions entirely heading into Q3. At the top of the heap, Seth Rosen’s Nitorum Capital dropped the largest position of the “upper crust” of funds monitored by Insider Monkey, valued at an estimated $10.4 million in stock, and David Costen Haley’s HBK Investments was right behind this move, as the fund dropped about $1.1 million worth. These bearish behaviors are intriguing to say the least, as aggregate hedge fund interest fell by 3 funds heading into Q3.

As you can see these stocks had an average of 20.75 hedge funds with bullish positions and the average amount invested in these stocks was $196 million. That figure was $203 million in SMPL’s case. Brinker International, Inc. (NYSE:EAT) is the most popular stock in this table. On the other hand TTEC Holdings, Inc. (NASDAQ:TTEC) is the least popular one with only 15 bullish hedge fund positions. The Simply Good Foods Company (NASDAQ:SMPL) is not the most popular stock in this group but hedge fund interest is still above average. Our calculations showed that top 20 most popular stocks among hedge funds returned 1.9% in Q2 through May 30th and outperformed the S&P 500 ETF (SPY) by more than 3 percentage points. Hedge funds were also right about betting on SMPL as the stock returned 6.1% during the same period and outperformed the market by an even larger margin. Hedge funds were rewarded for their relative bullishness.